The death toll at Poland's eastern border keeps rising as Polish authorities remain unmoved by cries of refugees desperate to find asylum in Europe. On Friday, a 16-year-old boy from Iraq was reported dead shortly after he and his family were pushed back to Belarus.
REKLAMA
Ten artykuł czytasz w ramach bezpłatnego limitu

On Monday (September 27), over 20 Kurdish and Iraqi asylum seekers, including 8 children, ended up stuck in front of a Polish Border Guard facility in Michałowo. They refused to enter the building, begging the authorities to not push them back into Belarus.

Local residents spotted the group early in the morning and notified the Polish Border Guard. Terrified they would again end up on the Belarusian side of the border, the foreigners resisted and refused to be packed into a car. Yet, around 10:00 a.m., they were taken to the nearest Border Guard facility. There, they refused to enter the building, lying down on the ground in a sign of despair.

On the other side of the fence, activists associated with the Border Group organization (Grupa Granica), including attorney Maria Poszytek, attempted to communicate with the migrants. Even though the officers made it difficult, the activists managed to obtain the power of attorney to represent some of the stranded asylum seekers. The group was mostly made up of Iraqi nationals and Turkish Kurds. More than half of them were women and children, including babies, crying in their mothers' arms, dressed in onesies already soiled after their long journey.

Kurdish refugee: There are corpses in the woods

They should either send people back to their homeland by plane or allow them to seek refuge here because such a vicious cycle simply does not work. People are desperate. There are corpses lying there in the woods. Believe it. Kurds and Turks are going this way and that way, some of them are dying. The European Court of Human Rights should find a solution to this problem. Put these people in camps or don't force them to go on a journey that will kill them- Suat said.

Kurdish human rights activists describe how this mechanism of recruiting migrants works: - Belarus lifted visas to Turkey, so now human traffickers spread propaganda that the borders are open and they could take anyone to Europe. Especially in Kurdish cities, they take money from thousands of people, and then, hand in hand with the Belarusian regime, they leave them at the border.

- We want to give them diapers, rice cakes, and some bananas for the babies. Can we? - asked one of the volunteers.

The young border guard officer replied: - We cannot accept any food items. Hot meals waiting for them in the building downstairs.

The problem was that the refugees categorically refused to enter the facility, mistrusting the border guards. They already moved them across the Belarusian border too many times. Communication was difficult, the foreigners did not understand the instructions given in Polish and English. They didn’t understand the officers assuring them of their good intentions- or perhaps they did not believe them anymore.

Volunteers threw them food, candy bars, fruit puree pouches, cigarettes, wet wipes, and diapers over the fence. The foreigners caught them and thanked them. They gave the names of their relatives, asking to contact them on Messenger and let them know they were still alive.

- We are analyzing the whole situation and after verifying whether any of the people require medical help, where they come from, and whether they have any identification documents with them, we will take the appropriate action - said Katarzyna Zdanowicz, a spokeswoman for the regional office of the Polish Border Guard.

What kind of action? - She was not able to specify that. Officers on the ground refused to tell the volunteers where they were taking the migrants. 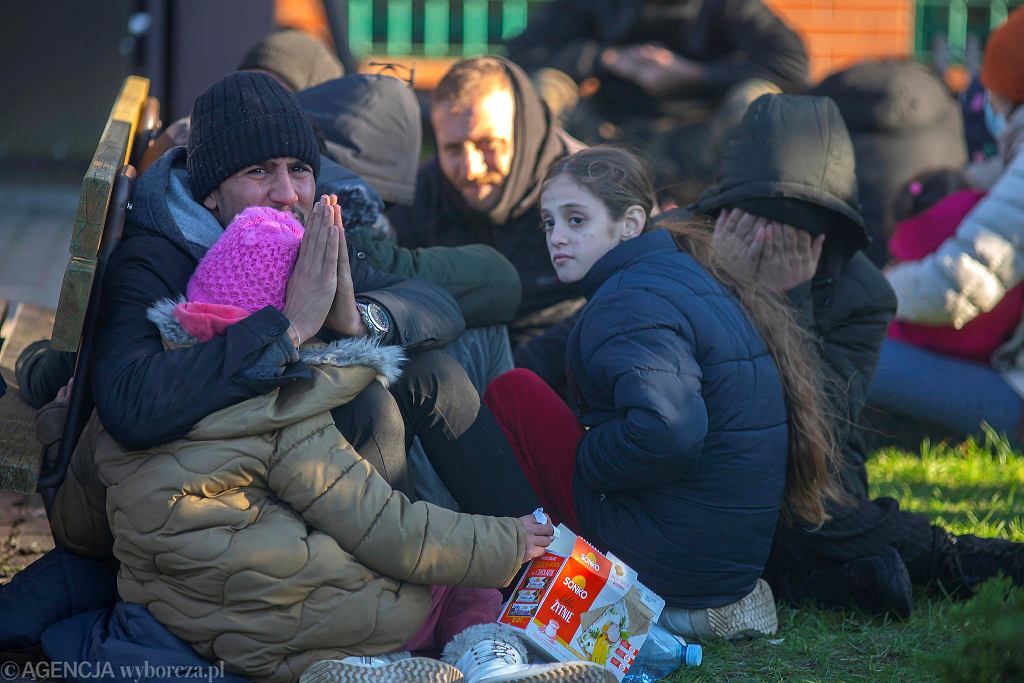 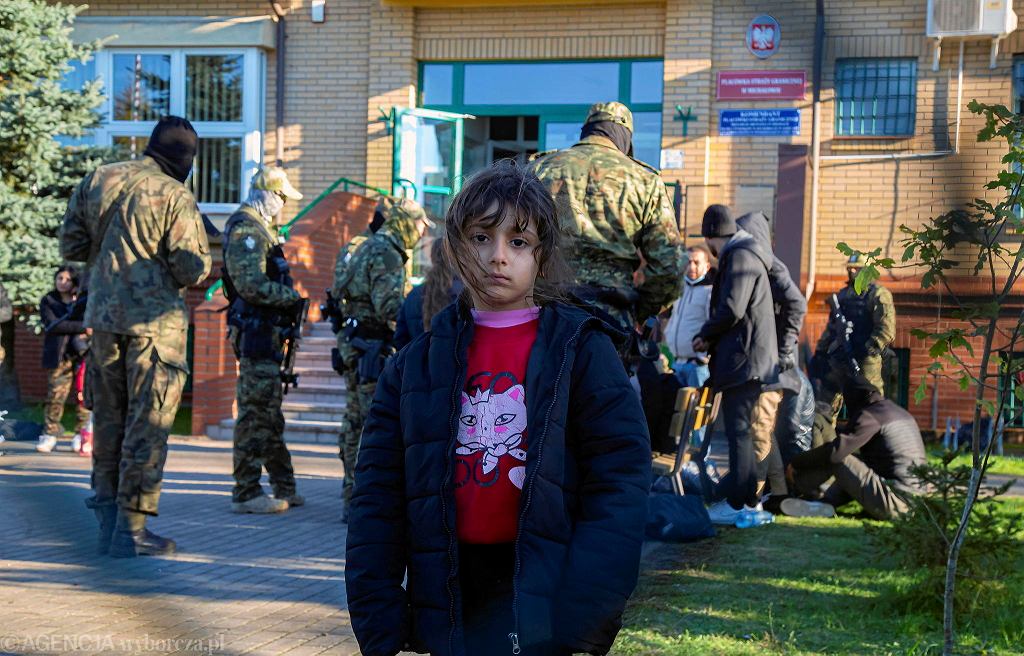 Refugees are calling for European solidarity

One of the women seemed very weak, and one of the men had an injured or dislocated leg. At one point, the refugees began chanting: "Avrupa!" – Europe, and "no Belarus!".

At around 4:00 p.m., a bus arrived in front of the facility and border guard officers started to pack the belongings of the refugees into it. The foreigners sat down on the ground, embracing each other, hugging their children. They folded their arms as if in prayer. They chanted, "Poland!" and had no intention of leaving.

Nevertheless, at 5:00 p.m., soldiers separated them and brought them to inside the border facility. The children were crying.

Finally, they were all packed into a bus that drove in the direction of Supraśl. The activists, who were following the bus in a car, were stopped for a "routine check." Agnieszka Kaszuba, a reporter working for the tabloid "Fakt", has also been stopped and accused of obstructing law enforcement officers, despite not being in a zone covered by the state of emergency.

- Together with Michał Kość, a photojournalist from the Forum Agency whom I picked up in Michałowo, I was following a convoy consisting of a bus full of migrants and two cars belonging to the Border Guard. Suddenly, two police cars appeared behind us. First, they stopped the car driven by the activists from the Border Group. Half a kilometer further, they stopped me. I was about 12 kilometers away from Krynki, outside the state of emergency area- Ms Kaszuba reported.

The police check took an hour. Officers found that there was no warning triangle and issued Ms Kaszuba a ticket. They also informed the journalist that "they received a complaint about a suspected offense of obstructing Border Guard officers". When they finally let her drive away, the bus was already gone. The journalist says that it drove off in the direction of Krynki- either to another facility or near the Belarusian border... 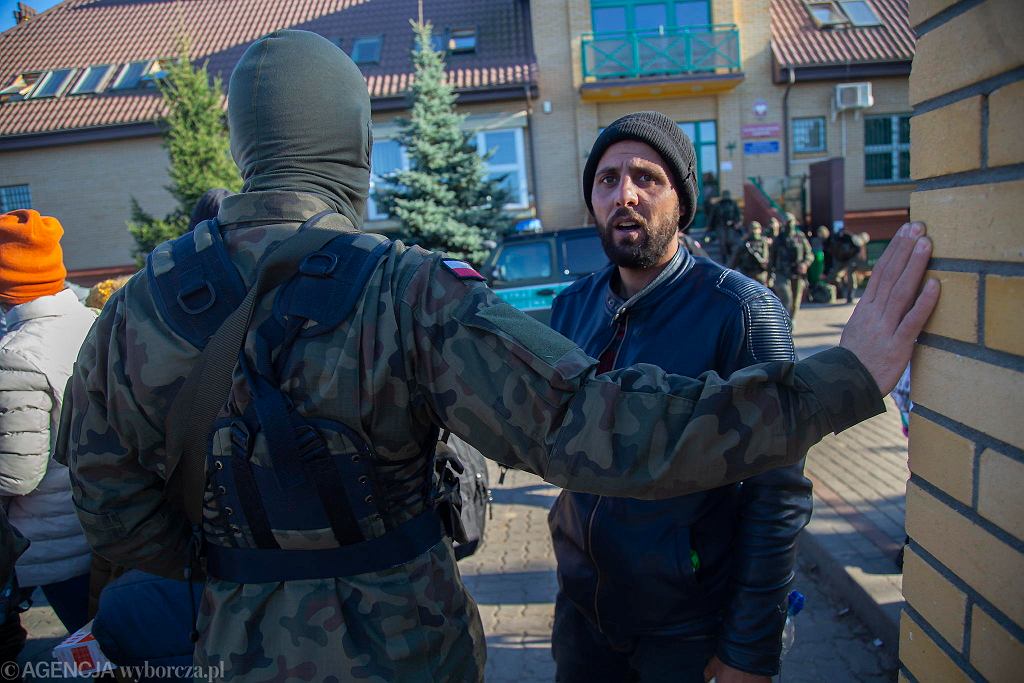 Pushed back into Belarus, again

On Tuesday morning (September 28), Katarzyna Zdanowicz, spokeswoman for the regional branch of the Polish Border Guard, admitted: - The people were brought back to the border line.

Meanwhile, the Ocalenie (Rescue) Foundation reported that a 16-year-old Iraqi boy, who was already in Poland with his family on Friday but was pushed back into Belarus by the Polish border guard officers, has been found dead.

On the same day (September 27), the Foundation reported yet another intervention - activists learned that several people, including small children, also needed help in Szymki. They rushed to their aid:

"Mr Amanj and Ms Avan were waiting for us, with their four sons and Abdullah, Ms Avan's 18-year-old brother. Border Guard officers were already on site, waiting for the transport. We managed to provide everyone with warm tea and food, we gave them sleeping mats, sleeping bags, sweatshirts, caps and jackets. We called an interpreter to talk to the family. They told us about the violence and poverty they were fleeing from. We explained to them why we needed the power of attorney. They signed the documents and appointed a representative. Two-year-old Avlan and four-year-old Alas wanted to play with us.

The transport arrived. The Border Guard officers refused to answer the attorney's question about where they were taking her clients. The bus drove off in the direction of the border, although the post in Michałowo was in the opposite direction. We followed them.

At the entrance to the zone covered by the state of emergency, we were stopped by the police. They checked us for half an hour. During that time, a Border Guard bus, probably empty, had left the area.

We don't know where they were deported to.

The temperature at night drops to 6 degrees centigrade".