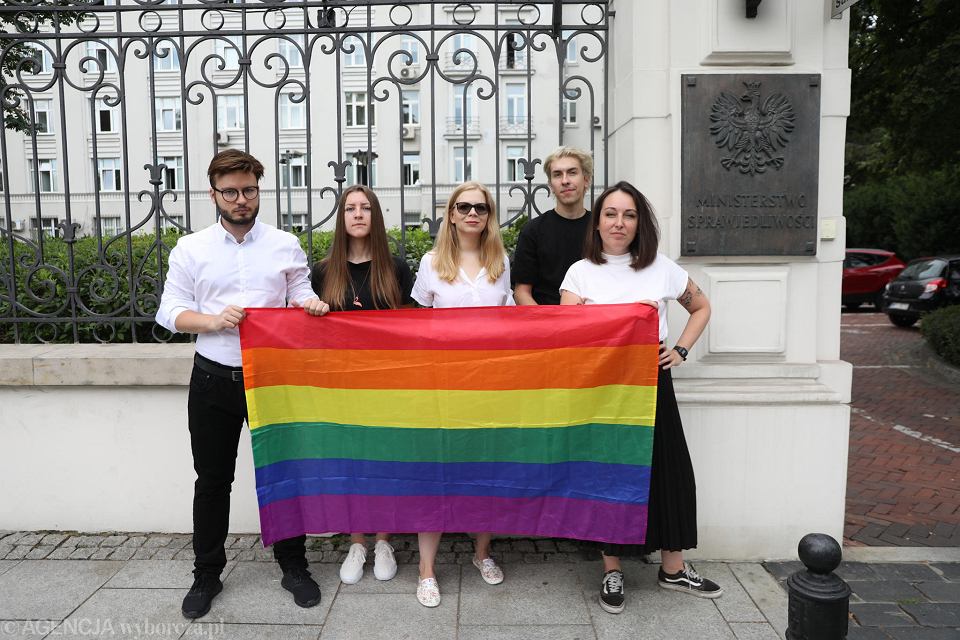 On Wednesday, the LGBT rights NGO Campaign Against Homophobia announced it is launching a new program providing legal assistance to all those facing harassment and persecution as a result of their pro-LGBT activism.
REKLAMA
Ten artykuł czytasz w ramach bezpłatnego limitu

The initiative was introduced at a press conference on Wednesday (July 28). Having gathered in front of the Ministry of Justice in Warsaw, members of the LGBT rights organization Campaign Against Homophobia (KPH) announced the launch of a legal assistance program providing help to all those facing harassment and persecution as a result of their pro-LGBT activism. Marta Puczyńska, Bart Staszewski, and Margot Szutowicz- activists who have already received such support- also took part in the conference.

The LGBT community is facing harassment from state authorities

- Today, Poland is a country where activists fighting for LGBT equality are frequent targets of harassment campaigns. We hear from the president that we are not human. The Minister of Education is telling us that human rights are silly. Female MPs applaud when they hear about cases of suicide among LGBT teenagers. Fortunately, there are also people who want a different Poland, and it is for these people that we are here today- said Justyna Nakielska, a member of the NGO.

Together with Karolina Giernal, a lawyer and coordinator of the organization’s legal assistance program, she listed the different forms of legal harassment LGBT+ rights activists have to face. These include unjustified police raids in private homes, brutal detentions during peaceful demonstrations, or undue arrests without contact with a lawyer, as well as numerous civil lawsuits against the activists aimed to "take up their time and gag them".

- Legal harassment is the daily reality of all those fighting for freedom, equality, and a dignified life for themselves and their LGBT+ loved ones in Poland. We have always stood by their side. Therefore, today KPH is officially launching a legal assistance program for all those on the frontlines of the battle for equality -  Ms Nakielska announced.

The program’s initiators emphasized that it is not only political activists who experience such harassment. It applies to everyone who dares to speak up for the rights of the LGBT+ community. The idea is that they won’t have to be afraid to take action.

- It is an assistance program for a teacher who got in trouble because she helped a student, for a principal who did not follow the guidelines of the school board and organized a "rainbow Friday". For a colleague, who in a large corporation takes the side of a gay colleague and gets herself fired - Karolina Giernal, attorney at law, enumerated.

-We want to show that the same law, which is now a tool of repression, can also be used as a protective tool against this repression. This program is a response to the chilling effect that the authorities want to achieve- she continued.

As the initiators announced, every person who qualifies for the program can count on free legal assistance from the Campaign Against Homophobia organization.  All those interested in receiving the help can apply via e-mail: pop@kph.org.pl.

Who can get legal aid?

The initiative involves a country-wide network of lawyers associated with KPH. For their work, they agreed to receive a minimum wage.

-Each person will be assigned a lawyer who will assist them until the end of the proceedings. If necessary, we will also provide advocacy and communication assistance, and if there are grounds for it, KPH may also cover the costs of court proceedings –Karolina Giernal explained.

She then listed some of the activists who are already receiving legal aid:

Margot: the authorities are less abusive when there’s someone taking care of all the legal issues

In an interview, Margot Szutowicz admitted that she has been receiving legal support from the NGO for about a year now, and she is very grateful for this help. - It's a particularly heavy burden when state authorities are dragging you to hearings several times a month and asking, for example, about a snowman someone made in front of the court building in Płock. I didn't even see this snowman. Supposedly, it had a rainbow flag stuck in it. Someone associated it with Virgin Mary, whom we came to see there, and the policemen asked us about offending religious feelings. There are plenty of such absurdities- said Margot.

- Thanks to KPH's legal help, the burden of this Kafkaesque process is lifted. I am very glad that now other people will be able to benefit from this kind of support. Especially, because I am aware of my enormous privilege of being a well-recognized person. I can see how a police officer's hand shakes at the sight of me, how it stops him from abusing his power.

Margot pointed out that the mere presence of lawyer Karolina Giernal during an interrogation stops police officers from allowing themselves to ask questions that force a confession because the lawyer quickly cuts them off. They also don't overextend interrogations, as they often would without a lawyer present. - But most important is the feeling that I have someone by my side who, as an LGBT person, understands me very well and is not delusional about how the legal system works-  Margot emphasized.

Bart Staszewski: the help is invaluable. It allows me to continue my advocacy

- In my case, the help at the beginning of 2020, when reports of alleged offenses started to be filed against me. First from MP Mularczyk, then from Ordo Iuris. The culmination came in early 2021 when the police began to question me en masse. I traveled to the other end of Poland to find out that the proceedings were discontinued or that the court decided that I am innocent- says Bart Staszewski, who has also been receiving legal assistance from the NGO for about a year.

- In total, we already have five court rulings in our favor, including three acquittals and two dismissals. I’ve traveled over 3000 kilometers all over Poland for the court hearings, in all of them I was accompanied by attorney Marcin Pawelec Jakowiecki. Legal assistance offered by KPH is invaluable. It allows me to continue my advocacy.