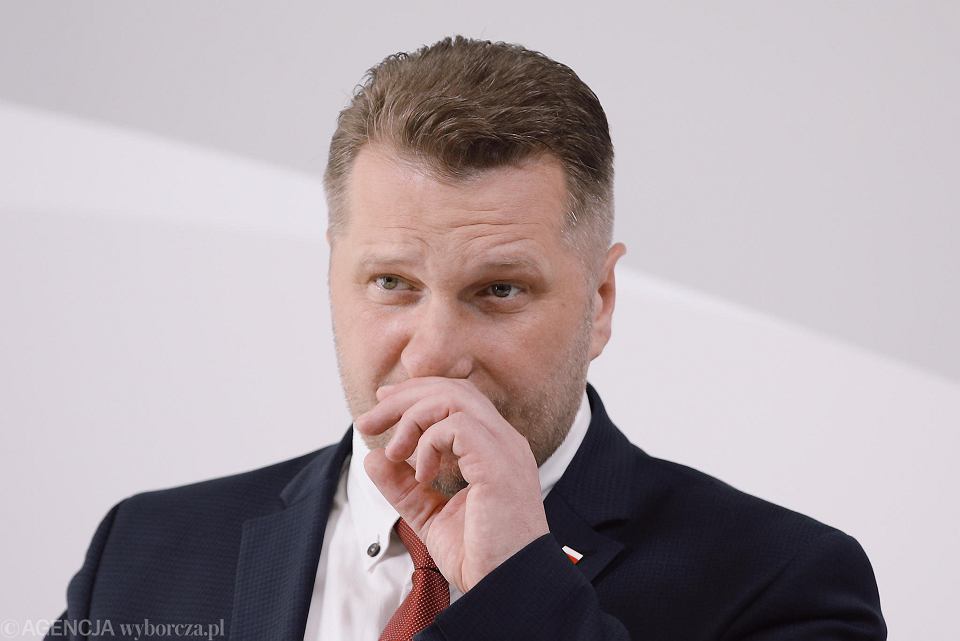 Echoing the sentiment of far-right groups protesting outside the Adam Mickiewicz University in Poznań, the Minister of Education criticized Polish universities for admitting large numbers of foreign students. "Polish education is for Polish students because it is financed by Polish taxpayers"- he stressed.
REKLAMA
Ten artykuł czytasz w ramach bezpłatnego limitu

Last Friday, on July 23, Poland’s Minister of Education and Science Przemysław Czarnek criticized Adam Mickiewicz University in Poznań for its student admissions policy. After the university published an initial list of admissions for the new academic year, it turned out that some of the highest-ranking candidates in several different study programs are applicants with eastern-sounding names. Among others, that was the case with the university’s psychology program, which was particularly popular this year. The Minister’s reaction echoed the sentiment of the far-right nationalist All-Polish Youth (Młodzież Wszechpolska), whose members unleashed a campaign against international students, accusing university authorities of favoring foreigners at the expense of Polish candidates. Responding to the criticism, Bogumiła Kaniewska, who heads the Adam Mickiewicz University, issued an official statement in which she assured that the university’s recruitment process happens in full accordance with the law.

Psychology is traditionally one of the most popular degrees among prospective students. This year, for each place in the program there were over a dozen candidates. According to the information provided by the Poznań university, among the 164 candidates who qualified for the program, 64 have eastern-sounding names. Some of them also received the maximum number of available enrollment credits. This year's minimum has been set at 80 (out of 100). After the All-Polish Youth picked up on the issue, the Minister of Education has joined the conversation as well. On Friday, July 23, he was a guest on the Polish Radio 24 and Polsat News. When asked whether it is more profitable for Polish universities to admit international or Polish students, he answered: -Poles, of course. Polish universities are for Poles, it's obvious. Just as  Polish education is for Polish students because it is financed by Polish taxpayers.

At the same time, he admitted that foreign nationals constitute only a small percentage of all students at the Adam Mickiewicz University. This was also confirmed by the university authorities. Each year, there is a total of about 37 000 people studying at the Poznań university. This academic year, out of the 25 000 candidates who applied for a stationary study program (less than eight thousand available spots), 1740 were foreign nationals. Compared to last year, the number of foreign applicants increased by 595. Candidates who qualified had to confirm their enrollment until Friday, July 23. - By Thursday afternoon, 547 international applicants had confirmed their enrollment- said the university’s spokeswoman Małgorzata Rybczyńska.

A cap on university admissions

How exactly does Mr Czarnek want to change that? That is still uncertain, as the Minister didn't provide any details. Currently, although all Polish universities are bound by national law, each of them has a different admissions policy for international students. While e.g. the Adam Mickiewicz University or the Poznań University of Life Sciences do not have a separate admissions process for Polish and foreign students, the Poznań University of Technology or Jagiellonian University in Kraków do. Medical universities also have caps on foreign students. This year, only three out of 180 spots at the Karol Marcinkowski University of Medical Sciences in Poznań were made available for foreign nationals.

But Mr Czarnek also tried to strike a more conciliatory tone. Among other things, he said that over the last decade the number of students in Poland fell from 2 million to 1.1 million, which means that applying to university should generally not be a problem. He also stressed that a large group of students are Ukrainian. – Today, I no longer have any doubts. There are indeed foreign nationals among students studying at Polish universities, some of them are Ukrainians of Polish origin. Here, we need more details, patience, and good will when it comes to data – the Minister said. According to data provided by Adam Mickiewicz University, the majority of applicants are of Belarusian origin.