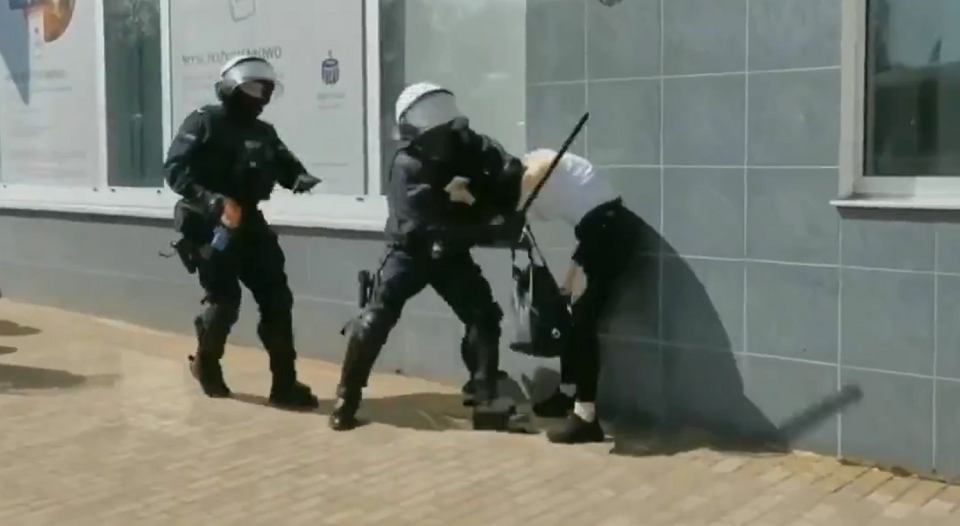 A local media outlet in Głogów, south-western Poland, published a video showing a policeman beating a young woman with a police baton and then knocking her to the ground. "This has been a procedurally appropriate use of a direct coercive measure" - regional police spokesman defends the officer.
REKLAMA
Ten artykuł czytasz w ramach bezpłatnego limitu

According to the Głogów Nasze Miasto portal, the incident took place on Sunday during a protest against government restrictions introduced due to the pandemic, such as the obligation to wear protective masks outdoors. It was attended by nearly a hundred people, mostly associated with the fan community of the local football club. The outlet reported that protesters were accompanied by a large police force, including anti-terrorist units.

When the police called for the protesters to disperse, their command was ignored. At a nearby gas station there was a scuffle between supporters and police, who used tear gas.

The website published a video showing a policeman in full riot gear charging at a young girl, then hitting her with a baton. The woman is trying to shield herself using her handbag. She was knocked to the ground, after which the officer put her hands behind her back.

The crowd reacted by shouting "leave her the f**k alone". Several policemen cordoned off their colleague from the demonstrators.

The footage went viral, eliciting a reaction from an opposition MP Michał Szczerba. On his Twitter account, he stated that he would identify the name of the police officer responsible and report him to the prosecutor's office. Szczerba concluded by saying that "two years from now he will be looking for a job in the Belarusian OMON [editor's note: Lukashenka's regime riot police]", implying that the opposition will win the 2023 parliamentary elections.

The spokesperson of the Provincial Police Headquarters in Wroclaw, Superintendent Kamil Rynkiewicz, defended the police officer's action during a press interview.

- I saw comments that the policeman was bludgeoning a woman. No such thing took place. A direct coercive measure in the form of a baton was used in accordance with the existing procedures, Rynkiewicz stated.

According to the spokesperson, the recording was taken out of context. - "The woman behaved very aggressively towards the officer: she pulled his uniform and insulted him during a profanity-laden rant. The officer warned the woman about the possibility of using direct coercive measures against her, but it did not affect her behaviour.

After the warning and the continued aggressive behaviour on the side of the woman, the officer used direct coercion in the form of a police baton, and the woman was overwhelmed and detained.

The spokesman added that the gathering was illegal and that the participants were not complying with pandemic-related restrictions. - They had no respect for their safety nor the safety of others. We have our own recordings related to the incident, we will analyse them," he concluded.