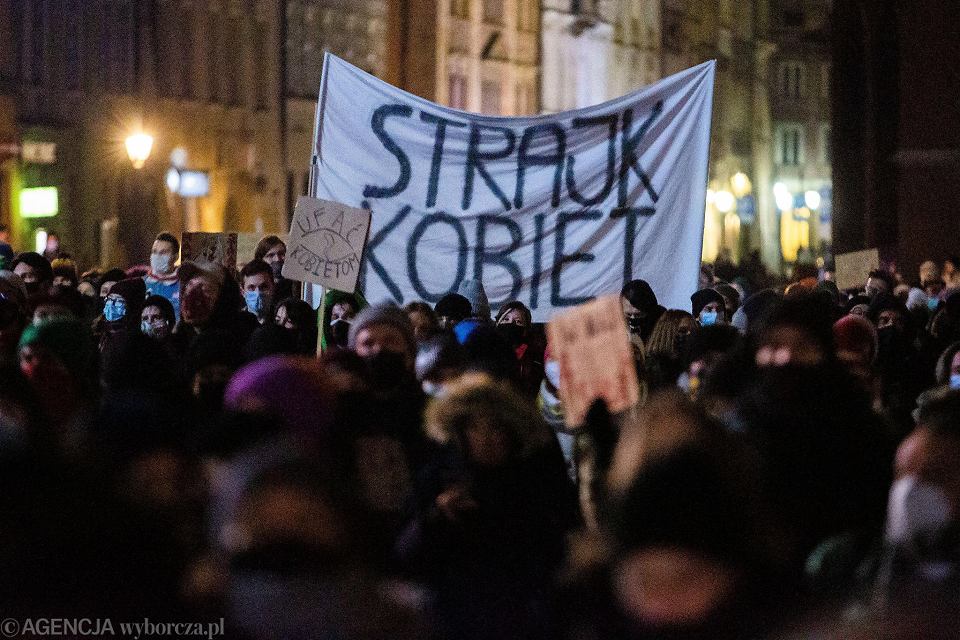 Last Wednesday, a woman in Cracow received a referral for abortion because of severe, irreversible defect of the fetus. A few hours later, the verdict of the Constitutional Tribunal was published and entered into force. - Unfortunately, we cannot perform the procedure anymore. This woman will be forced to carry the pregnancy until birth - doctors told "Wyborcza".
REKLAMA
Ten artykuł czytasz w ramach bezpłatnego limitu

"Barbarity" - this is how OB-GYN doctors from hospitals in Cracow describe the new abortion law that follows from the ruling of the Constitutional Tribunal. The same day the ruling was published, a commission of doctors met in Warsaw to decide on whether to qualify a patient for abortion.

Professor Hubert Huras, the head of the clinical department of obstetrics and perinatology at the University Hospital in Cracow and the region head consultant in obstetrics and gynaecology, explained to "Wyborcza" how the procedure of issuing such decisions looks like: - First of all, the qualification of pregnancy for termination is not issued by a single doctor. In our region, the procedures stipulate that every potential case of a lethal defect is consulted by two OB-GYN specialists together with the regional head consultant. We form a committee and the three of us sign the documents. A doctor who detects a lethal defect during the examination cannot be part of the committee, and those on the committee cannot perform the procedure. All this is done for full transparency, reliability and objectivity - explained professor Huras.

On Wednesday morning, the day of the publication of the ruling, a patient came to the University Hospital with a set of medical examination documents showing the suspicion of severe, incurable lethal defect of the foetus. - We have issued a decision that the pregnancy qualifies for abortion due to a defect in the foetus - confirms the regional consultant.

The woman was referred for an abortion procedure to be performed in one of  hospitals in Cracow.

Referrals are no longer valid

Only a few hours later, the Law and Justice-dominated Constitutional Tribunal published the justification to its verdict from 22 October 2020. At that time, the Tribunal declared unconstitutional the law allowing abortion due to severe, incurable foetal defects.

In the afternoon, on the government's website, information appeared that on the same day the verdict would be published in the Journal of Laws, making it legally binding. The verdict was published just before midnight.

- Unfortunately, it means that no hospital can perform abortion in the case of this patient or in any other that concerns foetus defects. The patient has a referral for the procedure, but the doctors cannot perform it - admits Prof. Huras.

According to Federation for Women and Family Planning's statistics, as many as 1074 out of 1110 abortions in Polish hospitals in 2019 were performed for embryo-pathological reasons (about 97 percent of all procedures). Prof. Huras was straightforward when talking to "Wyborcza": - Throughout my entire medical practice, I have not seen rulings allowing termination of pregnancy due to a criminal act. When it comes to issues of threat to the life of the mother, such abortions are also few, maximum a dozen or so, several dozen a year.

This is the first situation in which a judgement published by the Constitutional Tribunal directly affects the life of a pregnant woman. After the October ruling, three hospitals in Cracow continued to carry out abortions - including for patients from the neighbouring Podkarpacie region, where abortions were no longer carried out by any hospital. Doctors in Cracow were sounding an alarm, however, that after the publication of the ruling they would stop performing the procedures.

Abortion Dream Team and Abortion Without Borders offer their support

After the ruling entered into force, what are the remaining options for those forced by the state to carry out pregnancies in case of embryo-pathological damage to the foetus? The Abortion Dream Team, a pro-choice NGO, is encouraging every person in need to contact them and ask for support - We provide help to all those who need abortion - Natalia Broniarczyk, one of the founders of Abortion Dream Team, explained.

Pregnant women can call Abortion Dream Team and Abortion Without Borders, which helps to organize abortion abroad. - If a woman is between the 12th and 18th week of pregnancy, we help arrange an abortion procedure in the Netherlands. In case of pregnancies above 20 weeks, we coordinate a procedure in the United Kingdom - Broniarczyk clarified.

Activists from ADT connect pregnant women directly with Abortion Network Amsterdam. The first step consists of sending results of examinations and documents confirming defect of the foetus (documents are not required, but they allow to speed up the diagnosis abroad and shorten the time of waiting for the procedure and staying abroad). Abortion Network Amsterdam translates the documents into English or Dutch, and ADT and AWB help arrange transportation and stay at the clinic in the Netherlands.

For abortions in the UK, where travel is difficult during the pandemic, the Abortion Dream Team emphasizes that a letter can be obtained from clinics that the trip is for a valid medical procedure (it does not say abortion).

ADT has also set up special assistance for women who are as far as 24 weeks pregnant with lethal defects, and is helping to arrange abortions in Spain or Belgium.

In all cases, it is now recommended to take a coronavirus test before going abroad for the procedure.