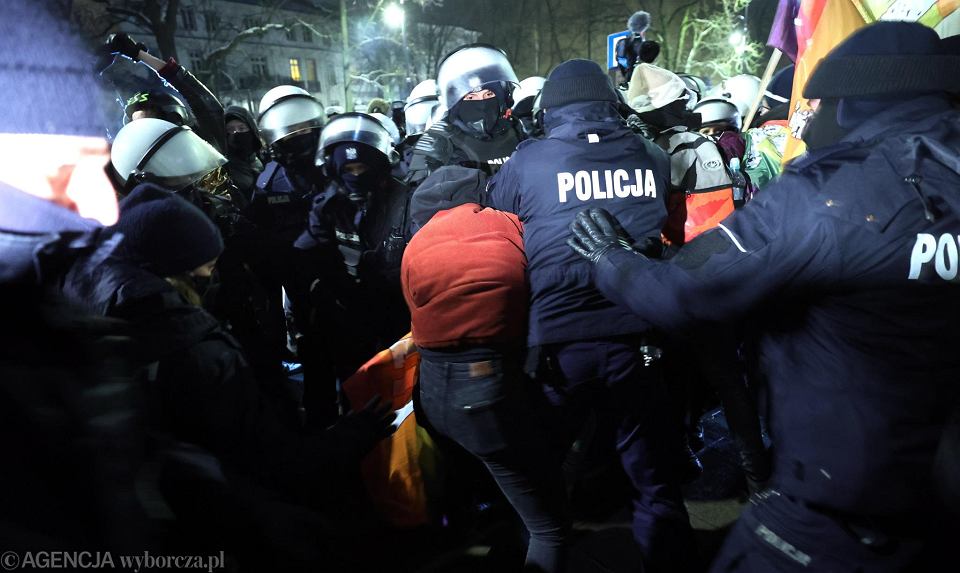 "The police took her away in handcuffs, she's been kept in a cold detention cell and an officer knelt on her neck" - activists describe the case of a senior protester from Warsaw known as Grandma Kasia. The police deny the allegations.
REKLAMA
Ten artykuł czytasz w ramach bezpłatnego limitu

Everyone who has been following the wave of protests that swept through Poland after the Constitutional Court decided to impose a near-total ban on abortion must have heard of Grandma Kasia. Ever since its announcement, thousands of people in Warsaw took to the streets to protest the ruling in multiple demonstrations. Katarzyna Augustynek participated in nearly all of them. She also joined the protest outside the court building last Thursday, standing there, as usual, with her signature rainbow-colored tote bag. This time, however, she’s been arrested. 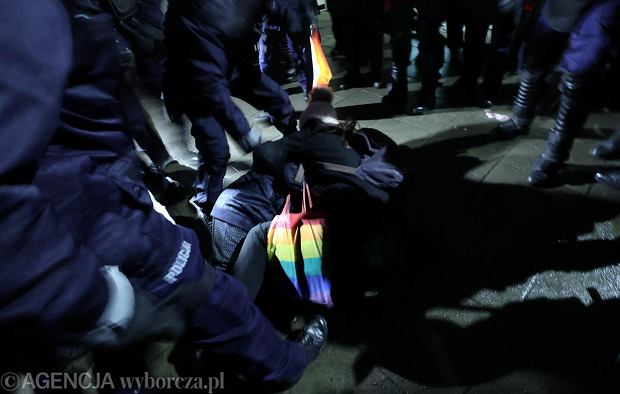 The Feminist Daily (Codziennik Feministyczny) quoted Grandma Kasia, who provided a detailed account of what she has experienced during the arrest: “After a brutal tussle on the street in front of the court building, I was thrown into a police car and taken away to a station in Pruszków, outside Warsaw. There, two policewomen brutally undressed me in a dirty toilet, jerking me on the floor and twisting my hands and fingers. They took off my shoes, pulled down my stockings, and left me with my underwear halfway down. Lying on my stomach, I was pinned to the ground and strangled. From the corner of my eye, I saw two policemen standing in the open doorway watching how their colleagues humiliated me" – reads the transcript. She did not get any water, she could not eat her sandwich, and she was allowed to take her diabetes medication only after a long discussion.

"Later that night, I was taken to Piastów, another town near Warsaw. My legs were bare and they remained that way until the end of my arrest. At the police station, I was harassed by two officers. I was brutally yanked and thrown around, they insulted me, saying things like "shut the f*** up". I was given breakfast, but they didn’t let me finish it, I had very little to drink. I was brutally moved to another ice-cold detention cell, without a jacket or even a blanket. I’ve been begging them loudly for a couple of hours for something to drink, my medicine (I have several chronic diseases), and something warm to wear. They didn’t provide any of these basic needs. During my 15 hour-long detention, I went to the toilet only twice. I was handcuffed during the entire interrogation. They put a camera on the table and pointed it at me. It’s just an outline of what’s happened” - the transcript ends.

We contacted ms. Augustynek. She confirmed the described events. - I wanted everyone to know how I was treated. The problem is, I don’t have any record of what happened there. It’s my word against theirs - she says.

Social activists want the police to face consequences for their actions

Activists from the Open Arms (Otwarte Ramiona) association side with Babcia Kasia. They reached out to the Minister of Interior and the Commissioner for Human Rights, writing in her defense. Citing ms. Augustynek’s drastic account, in their letters, they inform the authorities about "police abuse following Thursday's protest", which took place in front of the Constitutional Court building.

"The verdict issued by the Constitutional Court is reprehensible, as it takes away one of the women’s basic human rights - the right to decide about their own body and health. Following its publication, Poland has now the most restricted and inhumane law on abortions in Europe. It should not come as a surprise that when the rights of citizens are being violated, hundreds of thousands of Polish women and men go out on the streets to protest"- reads the letter sent to the Minister of Interior Mariusz Kaminski and the Commissioner for Human Rights Adam Bodnar.

Members of the Open Arms association point out that "even though the demonstrations are legal and have a peaceful character, we are dealing with constant and repeated instances of police brutality and abuse of force”. As an example, they mention the case of Katarzyna Augustynek, who - according to the activist and her allies - "was handcuffed by law enforcement officers and taken to the police station, where further actions against her can be simply described as torture – she was held for several hours without receiving any food or water, she was not allowed to take her medicine, she was kept in a cold detention cell and pinned to the ground with a knee - they claim.

The activists demand that officers who mistreated Grandma Kasia are brought to justice.

Police deny the allegations, denounce them as lies

We asked the spokesman of the Metropolitan Police Department to comment on ms. Augustynek’s arrest. Our inquiry has not been answered yet. Meanwhile, the TV station TVN reported that "police officers have denied and rejected the allegations."

Some of the law enforcement officers have also commented on the case on Twitter. Responding to an activist who accused the police of brutally mistreating ms. Augustynek, one of the officers wrote: "You could Tweet anything and find someone to believe it, even if it's a total lie. If you think you’ve witnessed an act that violated the law, file an official notice and confirm it in your testimony; but remember that false testimony is an act of perjury and has consequences."

On January 28, the Warsaw Police tweeted: "Everyone has the right to express their views. However, this right does not give anyone permission to behave aggressively. We urge everyone to control their emotions and help us to calm down people who have problems with self-control. Any instance of aggression against people and property will be met with our reaction".

During the protest at the gates of the Constitutional Court last Thursday, participants spilled red paint on the pavement and the shoes of police officers; someone threw a few firecrackers across the gate. Three people forced their way onto the Court’s premises and were detained. Among them was Klementyna Suchanow, one of the leaders of the Women’s Strike initiative. Around 2 a.m. police began to forcibly remove the protesters. It ended an hour later. In total, over a dozen of people were that night.

It is not the first time that Katarzyna Augustynek was detained by the police. Previously, she’s been arrested in December during a small protest in front of the Holy Cross Church in Warsaw. She was accused of battery and insult of a police officer.