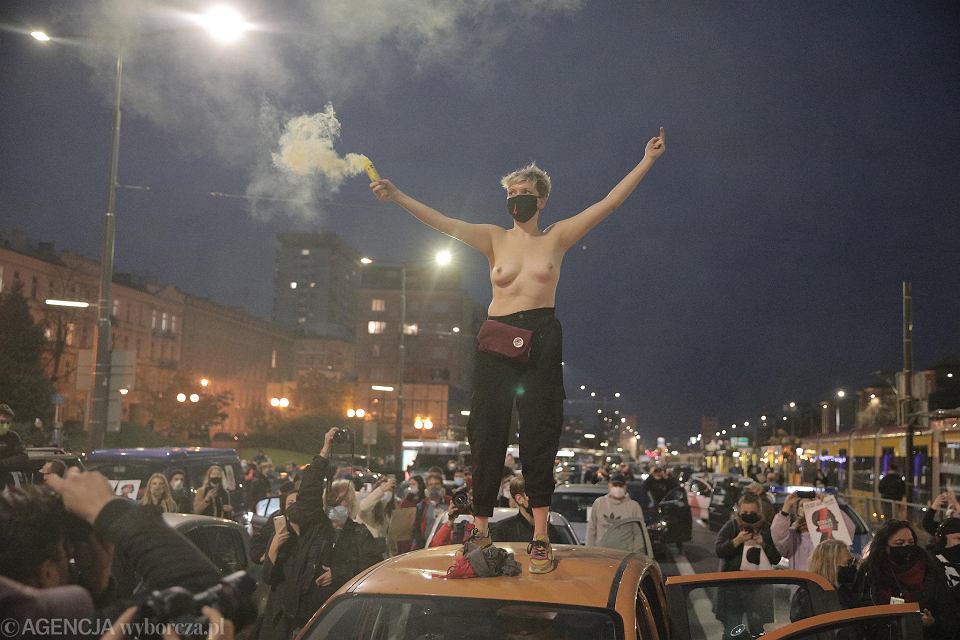 On Monday, Poland saw a wave of protests on a previously unprecedented scale. Hundreds of thousands of people blocked key streets and intersections of hundreds of Polish cities during rush hours to show their anger with the de facto abortion ban. In Warsaw, the protests ended only after midnight.
REKLAMA
Ten artykuł czytasz w ramach bezpłatnego limitu

In the capital of Poland, the protesters blocked traffic in the entire city centre and on the main streets connecting different city districts from 4 p.m. until late evening hours. All bridges on the Vistula River were blocked. In the city centre, most of the streets were empty, since the cars had no way to get stuck in them in the first place - they never got there as a result of the blockades. Instead of cars, roads were filled with thousand of young people marching as well as never-ending rows of public transportation buses and trams standing on hold.

Anger was the main theme of the protest - "Fuck PiS" was by far the most often chanted slogan.

Poznan, Cracow, Wroclaw were similarly paralyzed. However, the protests were not limited to the largest cities. The worst fears of right-wing politicians were realized as the protests were spread all over Poland. Crowds gathered even in places where there had been no street protests for many years.

The ruling camp can no longer count on the narrative of few rowdy feminists rioting in the big cities. Even small towns with less than ten thousand people went to the streets. Women were joined by families with children, and in some cases also farmers and football fans.

In Podkarpacie, a region where the Law and Justice party regularly has the highest support in the country, protests took place both in major cities (Przemyśl, Rzeszów) as well as in Lubaczów or Przeworsk, both of which have around 15 thousand inhabitants.

In Pomerania, in the small town of Nowy Dwór Gdański (population - 10 thousand), located 40 kilometers from Gdańsk, the local protest was joined by farmers on their tractors. In Lower Silesia, in the town of Świebodzice (20 thousand people), a motorcycle club from nearby Wałbrzych came to support the protest.

Police stays on the sidelines

The scale of the popular backlash meant that the police did not even try to intervene in most cases. Although the rapidly rising number of new cases of coronavirus caused the government to ban any public gatherings of more than 5 people, Polish cities were completely overrun by protesters for many hours.

At roundabouts and intersections from the cars were blasting music from their speakers, to which protesters gathered to block the streets danced. Attempts at provocation by small groups of far-right supporters did not lead to any major escalation. In Warsaw, during the eight hours of blockades and protests, the police detained a total of five people.

The country-wide mobilization continues on Wednesday, as the protest organizers announced that they are organizing a “women’s strike” and invite all women to refuse to work.