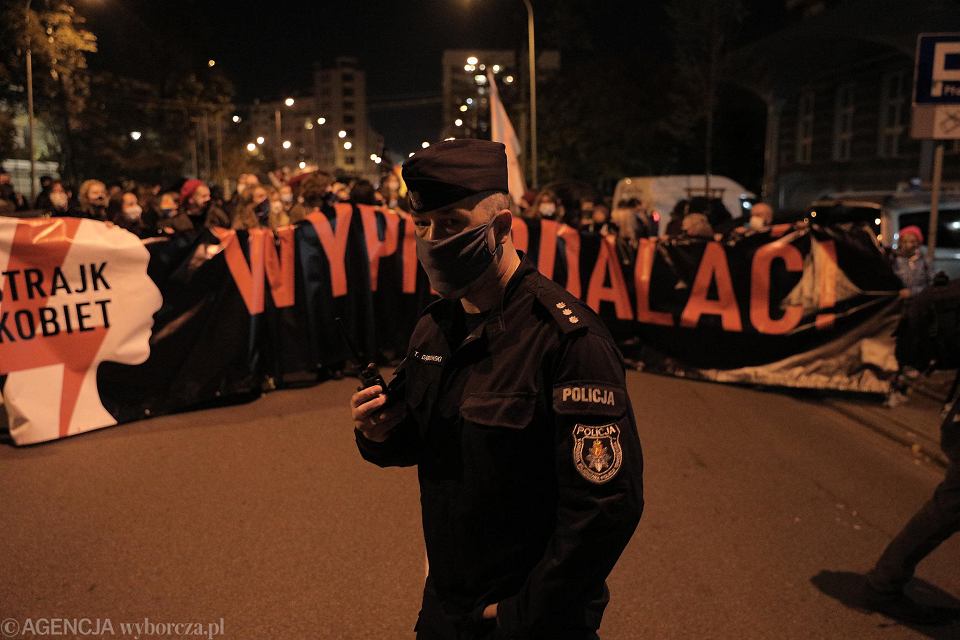 I don't know about you, dear readers, but I've had enough. The verdict of the so-called Constitutional Tribunal, which introduced - following the example of such human rights giants as El Salvador, Nicaragua and the Vatican - an actual ban on abortion in Poland, was the last straw.
REKLAMA
Ten artykuł czytasz w ramach bezpłatnego limitu

I don't know about you, dear readers, but I’ve had enough. The verdict of the so-called Constitutional Tribunal, which introduced - following the example of such human rights giants as El Salvador, Nicaragua and the Vatican - an actual ban on abortion in Poland, was the last straw.

I’ve had enough of treating women as walking wombs, as incubators whose "freedom to shape their living conditions" and "the right to satisfy their own and family's material needs" - in other words, life plans, aspirations, work, the ability to pay bills - are less important than an unviable foetus being born, the conscience of a doctor, or a satisfaction of a bishop.

I’ve had enough of the fact that "the constitution guarantees every human being equality, dignity and freedom from discrimination" - unless said human being was born a woman. Because for the Polish women all these values ??are suspended when the sperm hits an egg.

I am fed up with the fact that, again, it is mostly men who are debating whether women in Poland have the right to live. Yes, you read that right, to live.

During the hearing, Judge Piotr Pszczółkowski asked whether it the midst of an epidemic it was the best moment to eliminate the “embryopathological exception” (Polish law permits abortion only in three cases: rape and incest, when pregnancy threatens the life and health of the woman, and if foetus is severely deformed) and whether the state is prepared for the consequences. Law and Justice MP Bartłomiej Wróblewski replied that “no circumstances weaken what is due to the sick and disabled” - unviable fetuses, that is. "Aren't you afraid that it would be more difficult to provide care to women who will be forced into certain behaviours?" asked the judge.

Wróblewski was not afraid. "Everyone has the right to live," he said.

Judge: “And these women? Their right to life and health?”

MP: “Male and female disabled and sick people also have this right. We consider attempts to antagonise, to suggest that some action is taken against women, inappropriate."

So, dear readers, if, you are in the 25th week of pregnancy with unviable foetus, this foetus dies, you get sepsis and there will be no place for you in a hospital because it’s full with covid patients, don’t antagonise. No action is taken against women.

I’ve had enough of men explaining to me that "possible psychophysical discomfort of a woman" - such as you know, one related to giving birth to a child without half the skull or with organs outside of its body - and "negative emotions" should be no reason for "killing the unborn". I'm sick of this impudence, this condescension, this elemental lack of empathy. How can you call "negative emotions" a situation in which you know for four months that your baby will die immediately after birth, and you have to carry the pregnancy to term, you have to endure congratulations, belly grabs, asking for the baby's name - and then awkward silence and pity? How can you call labour "possible physical discomfort" and spending days or weeks in a hospice as "mental discomfort"?

Finally, I’ve had enough of violence against women and torturing them with impunity. And it is difficult to call what is already happening in Polish hospitals by any other name. Here is a story of Katarzyna Wójtowicz, a woman who had to endure it.

“A dozen years ago I got pregnant. In the 12th week, I went to the university hospital in Krakow. Pregnancy pathology ward. I was bleeding, in pain, and my water was seeping. Doctors decided: we maintain the pregnancy. Nobody asked me.

My bed was placed on wheels so that my uterus was higher than my head. They put needles in my arms so that drips could be connected. I was lying like a crucified Christ… only my head was lower than my legs.

“The doctors said nothing. They told me to lie down and not move because slightest movement caused my uterus to bleed. A week has passed… I felt terrible. Physically, mentally, emotionally. My head ached, my stomach ached, my whole body ached. I reported the pain. Nurses answered: it must be like that. You want a baby, you have to suffer. I wanted a baby. I didn't want to suffer.

“I shared the room with other patients. Guests came to visit them every day. All day long. From morning until late evening. I was the only lying patient. Every day, when I wanted to urinate, I had to ask all those partners, fathers, brothers, friends, mothers, aunts and friends to leave the room. Every day I was afraid that they would come back too early.

“The baby’s heart rate was checked daily. I had an ultrasound twice a week. In silence. I was driven on the bed with these drips so that the doctor could look at the monitor and make a face. The monitor wasn’t turned towards me. Nothing was explained to me. I only got information that the child was alive and that I was to lie down. I did not ask. I felt very bad. I was afraid. I was sore.

“Two days later - on December 24 - I asked to be examined. I have reported that I think something is very wrong. I was refused. Christmas Eve, little staff, one doctor. There was no time for such whims.

“On December 25, while using the bed pan, I discovered that something had slipped out of my uterus. Shock. Scream. Hysteria. Doctor, nurse, doctor. Silence. They need to observe. They need to think. They leave me alone.

“Minutes take up forever. Finally, information and decision. ‘We’re going into labour. You’ll get a 'provocation' because the baby is dead.’ Panic. Fear. FEAR. FEAR.

“I was taken to the delivery room. Vaginal pills and injection were applied, and a drip was connected. I asked for a mechanical cleaning of the uterus. The doctor refused.

“Labour began. Labour pains. I wasn't screaming. I was crying softly. I was alone. I knew I was gonna give birth to a dead baby. I did my best until I couldn’t push anymore. I heard: 'One more time. Push! I already hold the legs' I couldn’t.

“I felt a tug. The doctor pulled out the foetus. I heard: 'Son. Do you want to see?'. The nurse shook her head violently. I realised that it's better not to look ...

“Later it turned out that my son was completely deformed. He didn't even look human. Undeveloped limbs. Ears wrong, face undeveloped...

“I was in the hospital for several weeks. They examined me twice a week. Did ultrasounds. These deformities were visible. Doctors knew. And they kept it to themselves. They decided for me to continue the pregnancy. They threatened me that if I left at my own request, I would get a haemorrhage and the ambulance might not be on time. They decided for me that I would give birth naturally. Even though I said I didn’t want to. Only after I gave birth to a dead baby, they put me under an anaesthesia and cleaned my uterus. As if it made any difference for the foetus.

“If I knew. If I could make a decision. I would have had an abortion.

Can any of the men so eager to speak about abortion even imagine being in this situation? Being incapacitated due to someone’s arbitrary decision? Disregard of their explicitly stated wishes? Deciding for them? And for what - for the dignity of a dead foetus? For someone's clear catholic conscience? So that the doctor could have his arse covered and not have fanatical opponents of abortion showing up outside the hospital with pictures of fragmented foetuses? No? I’m not surprised, it won’t ever happen to you. And for women in endangered pregnancy, it is a dismal norm in this country.

I’ve had enough of abortion stigma, I’ve had enough of hypocrisy, I’ve had enough of hate. Abortion was, is and will be: because there is no 100% effective contraceptive, because men rape, because there are lethal defects of the foetuses. According to the CBOS survey from 2013, between one-third and a quarter of Polish women have had an abortion experience. And the fact that nowadays Polish women terminate their pregnancies less frequently than in the communist Poland was less influenced by the 1993 antiabortion law and more by better access to contraception. The ban on abortion doesn't prevent them - it makes them more expensive and dangerous. It doesn’t affect fertility, except in a negative way. At the end of communism, when the number of abortions was estimated at half a million a year, a woman on average gave birth to more than two children. Today - 1.4. Defenders of the Polish family, how many women over 35 will risk having children after this verdict? And how many will terminate an early pregnancy?

Finally, I’ve had enough of the so-called abortion compromise, the holy grail of Polish abortion debates. It was not a compromise, unless we are talking about a compromise between the Church and the right. It was a deal made over the heads of Poles, especially Polish women, ignoring their opinion on this subject, repeatedly expressed in polls. Ignoring one and a half million votes calling for a referendum on the issue. A dictate of a small minority - a Church that, by definition, has nothing to do with reproduction, and right-wing politicians, mostly men - sold as a reasonable concession from both sides.

If something good can come out of this verdict, it is the long overdue end of this pseudo-compromise. Time to end this hypocrisy, to stop outsourcing abortion abroad and underground. Time to adapt Polish legislation to European standards: abortion on request up to the 12th week, after that date when the foetus is unviable or when the pregnancy threatens the woman's life and health.

Więcej na ten temat: news from poland
czarnajama 27.10.2020, 23:18
It is clear that Kaczyński's oration on Facebook and Piotr Duda's statement are calls for open Fascism, for a National Guard of street thugs ostensibly to defend churches, but really to frighten the protesters (young women and their allies). Kaczyński in his dotage seems determined to open a civil war. We are moving into revolutionary times.
już oceniałe(a)ś
0
0
Odpowiedz