– I was staggered by the letter ambassador Przyłębski sent his Ukrainian colleague, ambassador Melnyk. It shows an absolute lack of diplomatic sensitivity and empathy. The effects might be very harmful- says our source in the German foreign service.

– Being an ambassador in Berlin, Przyłębski is free to criticize German journalists and politicians all he wants, but he should leave the Ukrainians alone! – says another one of our informants.

A third source, also asking to remain anonymous, points out the colonial tone towards Ukraine that permeates the whole letter.

The document causing such strong reactions is an official letter that the Polish ambassador (privately the husband of Julia Przyłębska, the president of the Constitutional Tribunal nominated by the ruling Law and Justice party) sent to his Ukrainian counterpart, Andrij Melnyk, in May.

„Wyborcza" obtained a copy of the letter. It begins with a cordial expression of gratitude for joint participation in the commemoration of the end of WWII and the assurance of Poland’s long-standing support for Ukrainian independence. The diplomatic tone, however, ends right there... 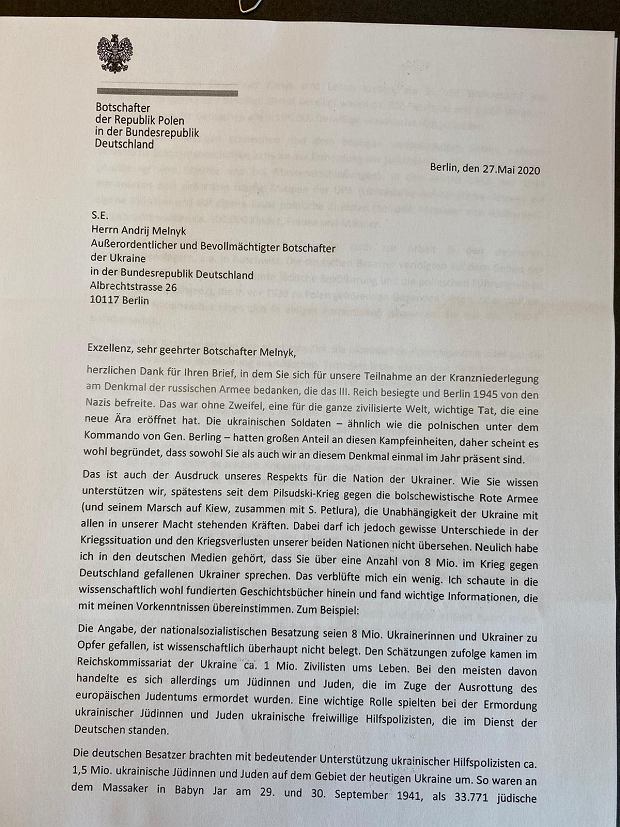 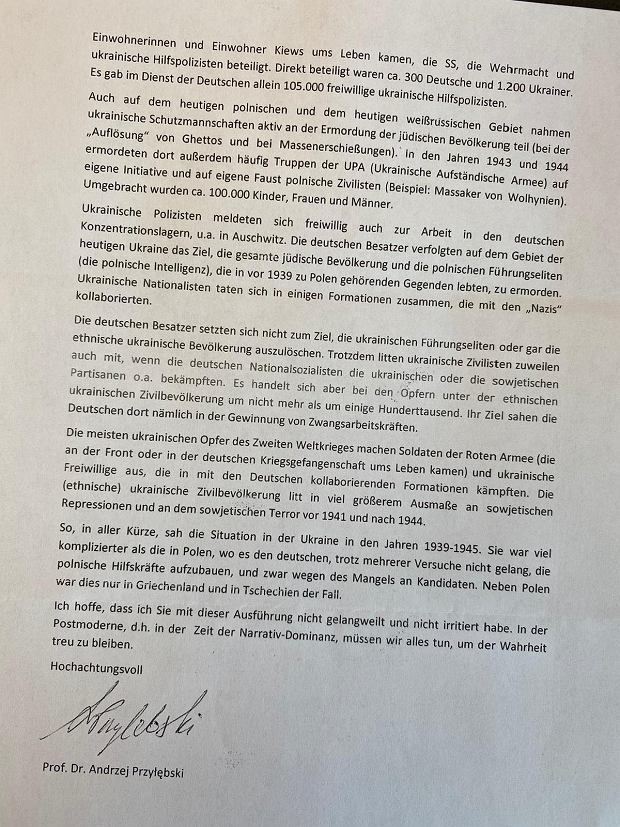 In his letter, Przyłębski also lectured his Ukrainian colleague about the scale of Ukrainian collaboration with the Nazi regime: “Historians estimate that approximately one million civilians were killed in the Reichskommissariat Ukraine [the name given to the civilian occupation regime on the Ukrainian territories governed by Nazis]. Most of the casualties, however, were Jewish. Members of the volunteer Auxiliary Police, German collaborators, played an important role in murdering the Jewish population" – he wrote, mentioning the massacre in Babi Yar, where, at the end of September 1941, over 33 thousand Kyiv Jews were murdered.

Przyłębski also mentioned the 1943 massacre in Volhynia, where Ukrainians murdered between 40.000 and 60.000 Poles. He also referred to the Ukrainian participation in the liquidation of Jewish ghettos and the Ukrainians who served in the Nazi concentration camps.

A monopoly on martyrdom

Although admitting that Ukrainian civilians fell victim to German anti-partisan operations, Przyłębski also emphasizes that "there were no more than several hundred thousand casualties”. Because, as he attempts to demonstrate, unlike in Poland, Germans in Ukraine did not pursue a policy of targeting the civilian population and mass-murdering intellectuals, but instead treated the country as a reservoir of labor power.

"I hope you didn’t find my elaboration too boring or irritating. In these postmodern times defined by relativity, we must do everything we can to uphold the truth” – the Polish ambassador concludes.

The message his letter was meant to send is clear: Ukraine has no right to claim that it suffered greater wartime losses than Poland.

What about the monument commemorating Polish victims of Nazi terror?

"Classifying the victims of National Socialism into more and less important ones is deeply concerning" - reads an excerpt from Ambassador Melnyk's letter to the German parliamentarians. In it, Melnyk criticized the fact that while in the discussions about German WWII atrocities Polish victims receive special attention, Ukrainian casualties are largely ignored.

Ambassador Melnyk warned German politicians against following in the footsteps of the Polish government and instrumentalizing history on a large scale. As evidence, he included a copy of the letter Przyłębski sent him in May. He then accused the Polish ambassador of "cynically casting doubt on Ukrainian wartime losses and manipulating the data”.

„This shameless document is yet another proof of Poland’s attempt to monopolize the role of a WWII martyr and eclipse other nations who have suffered just as much” – wrote the Ukrainian diplomat.

The diplomatic scandal casts a shadow over the discussion about a monument dedicated to Polish victims of German WWII atrocities that was meant to be erected in Berlin. Florian Mausbach, a 73-year-old retired city planner and former head of the Federal Office for Civil Engineering and Land Use Planning, initiated the project three years ago. He collected dozens of signatures from German politicians, academics, and cultural figures to petition the government.

"There is not a single Polish family that wasn’t affected by the German occupation. The unimaginable suffering and great sacrifices of the Polish people deserve a separate commemoration in the center of our capital, don’t you think? - reads his appeal.

He suggested building the monument at Askan Square, near the Anhalter Bahnhof railway station in the center of Berlin. It would complement other German memorials erected for the victims of the National Socialist regime - Jews, Roma, and homosexuals.

The idea was met with great sympathy, but problems started to arise soon afterward. Some voices argued that because Ukrainians, Belarusians, and Russians also fell victim to German wartime atrocities, no nation should be singled out and given greater privilege than others. The opinion was echoed by the Ukrainian ambassador to Berlin. In his letter, he wrote that he had nothing against a monument commemorating Polish casualties, but warned Germans against favoring them. He claimed that he would prefer to see a separate monument erected for Ukrainian victims.

Publicizing Przyłębski's controversial letter only speaks in Melnyk's favor. Even more so, considering the many diplomatic faux pas Prof. Przyłębski committed in the past. In his speeches, he often praises the achievements of the ruling Law and Justice government, attacks German authorities, condemns local journalists. He also announced that under Jarosław Kaczynski’s leadership, "Poland will heal the European spirit".

- To put it mildly, he is not taken very seriously in Germany- says one of our sources in Berlin.

A couple of months ago, German scientists proposed a compromise regarding the monuments: a center documenting German crimes against the nations of Europe. The Bundestag will debate this issue on Friday.

And what about the monument for Polish victims? Our informants say that the German parliament might discuss the issue at the end of this month. However, given that Przyłębski's letter was made public, its future is not so certain anymore.

- This arrogant tone shows Poland’s self-serving approach to history. It shows that Poland doesn’t recognize any other victims than its own. The case might be already closed- says one of our sources.

- At first, we were afraid that it might lead to an international scandal. It is impossible to talk about history with governments that use it to make politics- says our second source, predicting that Germany will end the Polish-Ukrainian dispute by abandoning the plans to erect the monument altogether.

- I don’t understand why Przyłębski even started this discussion in the first place. How Ukrainians decide to remember their victims is none of our concern. The role of the Polish ambassador is to look after Polish interest abroad. Przyłębski's behaviur only harms that interest- says Włodzimierz Cimoszewicz, former Prime Minister and chief diplomat, currently a member of the European Parliament.

Ambassador Melnyk refused to comment, and the Polish Ministry of Foreign Affairs didn’t respond to our request for additional information.

Więcej na ten temat: news from poland
czarnajama 11.10.2020, 20:36
This all smells like a Russian provocation sowing confusion and ill feelings between Ukraine, Poland and Germany. All too often the actions of PiS functionaries, especially those who are longtime close associates of Jarosław Kaczyński, for all intents and purposes serve the interests of Putin and not of Poland or the EU.
już oceniałe(a)ś
0
0
Odpowiedz