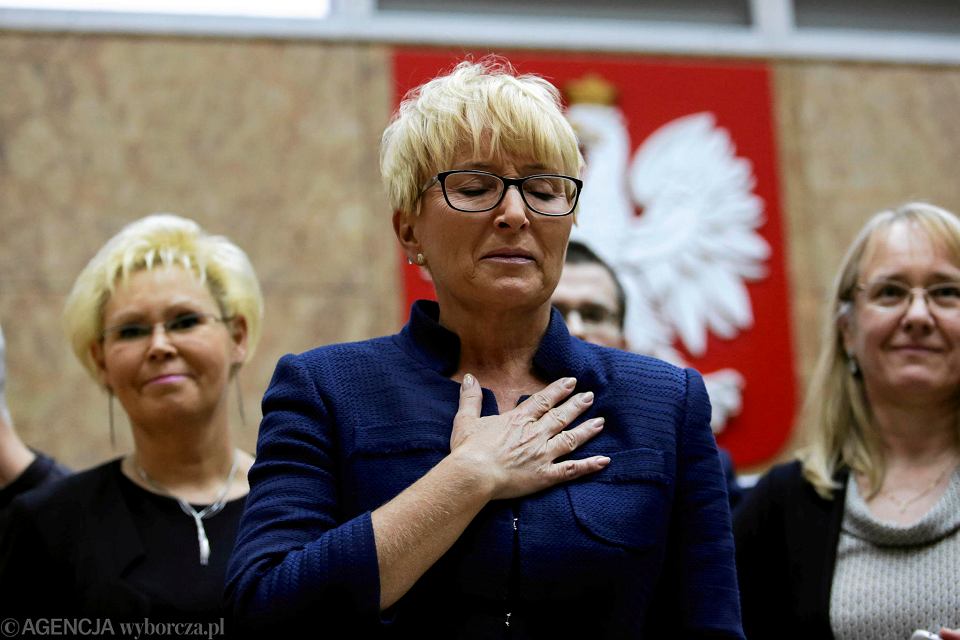 Last year, the chair of the government-critical association of judges "Themis", Beata Morawiec, had won a court case against the Minister of Justice Zbigniew Ziobro. Now, the public prosecutor's office is threatening her with corruption charges. Judges, lawyers, and NGOs all around Poland have declared their solidarity with Morawiec.
REKLAMA
Ten artykuł czytasz w ramach bezpłatnego limitu

According to the public prosecutor’s office, Beata Morawiec, a judge at the District Court in Kraków, might now be facing up to 10 years in prison. Investigators have already filed a request to suspend her legal immunity and want to press criminal charges. Allegedly, she was supposed to accept a cell phone as a bribe to rule in favor of the defendant and take PLN 5.000 to prepare a judicial opinion she never delivered. Morawiec denies these allegations as “nonsense”.

Many judges who doubt the intentions of the investigators have recently declared their “solidarity with Morawiec”.

- The public prosecutor’s office is controlled by Zbigniew Ziobro, who serves both as the Minister of Justice and the Prosecutor General- they point out. Facing him is Beata Morawiec- chair of “Themis”, an association of judges who’s been consistent in criticizing the Ministry of Justice for its efforts to undermine judicial independence. She’s also been successful in taking legal action against Ziobro. Morawiec sued the Minister of Justice for defamation and won the case in a court of the first instance. In an official statement issued by the Ministry of Justice, her name was inaccurately linked to another prosecutorial investigation. As a result, she’s been dismissed from her position as chair of the Regional Court in Kraków.

-This entire case has nothing to do with justice or punishing a criminal. It’s about harassing a judge who’s fallen out of favor with the Minister of Justice- thinks Dorota Zabłudowska, a judge from the city of Gdańsk. She points out that the pro-government news service Wpolityce broke a story about the planned charges against Morawiec even before the prosecutor’s office mentioned it. Soon after that, agents from the Central Anti-Corruption Bureau (CBA) entered her house with a search warrant, taking her laptop which contained classified information.

-If this is how the government deals with unruly judges, I wonder what will happen to other people who dare to stand up to the Minister of Justice: political opponents, opposition leaders, or even regular citizens? As long as the prosecutor’s office is not an independent institution, no one can sleep peacefully. Today it’s Beata, tomorrow it’ll be you- says Ms. Zabłudowska.

Many other people seem to share her opinion. In recent days, judges, lawyers, attorneys, and local activists gathered in front of courts in cities all around Poland holding signs with messages of solidarity and support for Morawiec. Some 150 people gathered in front of a local court in Kraków.

-It is our duty to draw attention to instances where judges are being pressured into submission. We cannot ignore it. Otherwise, all of us might lose our constitutional right to effective legal protection - says Monika Maćkowiak, a judge at the District Court in Bydgoszcz.

-I’m grateful for all your support. Slander can be a very effective weapon in the hands of people who want to destroy other people- Morawiec said addressing her supporters. – You’ve known me for many years, and you know perfectly well that I do not have to explain myself. But there are many other people who do not know me at all. And to them, I want to say: I have never committed a crime in my entire life. Those who say I did, are lying.

“There are moments in life when you have to make a clear statement about what you do and do not believe in. I believe that Judge Beata Morawiec is an honest person. I do not believe that there are any facts to support the charges against her” – the retired Supreme Court Justice and former chair of the Disciplinary Chamber, Stanislaw Zablocki, wrote in a post on Facebook.

"Ms. Morawiec is a very principled person with a strong moral backbone, and her professional record is there to prove it – she’s been a long-time judge, former chair of a district court, former member of the National Council of the Judiciary, and a former deputy disciplinary prosecutor. Her many years of service are proof of what values she stands for - She has shown through her many years of service what values guide her in life". – reads a statement published by the Kraków branch of the association of judges “Iustitia”.

Many legal associations and NGOs also voiced their support for Morawiec. "We strongly condemn the actions taken against Beata Morawiec, which are aimed at discrediting her, both professionally and privately, and preventing her from participating in public life”. – reads a statement signed by 11 organizations associated with the Justice Defence Committee, including the Helsinki Foundation for Human Rights and the Free Courts initiative.

The Warsaw Bar Association adopted a resolution on prosecutorial investigations seeking to "undermine judicial independence". Commenting on the attempts to search the judge’s house even though she declared her willingness to provide the prosecutor with all the requested material, the attorneys wrote: “We perceive it as an unacceptable element of a repressive campaign against the judiciary, aimed at intimidating and subjugating them".

The Disciplinary Chamber of the Supreme Court, a legal body staffed with judges nominated by the president in a politicized process, will decide on Ms. Morawiec’s legal immunity on October 12. The case will be heard by judge Adam Tomczyński, who in past encouraged people to vote for the Law and Justice party in his Twitter posts.

According to lawyers from the Justice Defense Committee, the Disciplinary Chamber has no right to pass judgment on that case. In April, at the request of the European Commission, the EU Court of Justice suspended the Disciplinary Chamber. While the judges sitting in the Chamber are no longer hearing disciplinary cases, they still rule on cases concerning legal immunity.