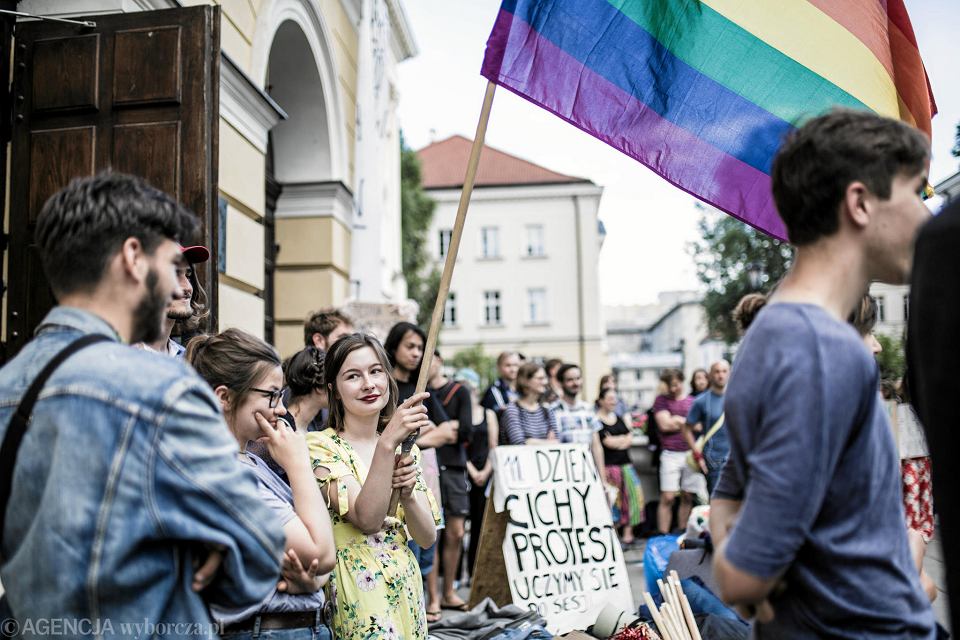 Members of the radical government faction led by the Minister of Justice, Zbigniew Ziobro, want to ban "LGBT ideology" from schools and universities. Warsaw university professors are appalled. It would be a violation of the Polish constitution and the freedom of scientific research- they say.
REKLAMA
Ten artykuł czytasz w ramach bezpłatnego limitu

The anti-LGBT campaign of the Polish right-wing coalition government continues, and it looks like educational facilities are supposed to be next on the agenda. Such plans were announced last week by Michał Woś - a member of the United Poland (Solidarna Polska) faction led by the Minister of Justice. Although Mr. Woś serves as the current Minister of Environment, it didn’t stop him from making comments on policy issues affecting higher education.

Here’s what he said: -Now is the right time to deliver on all the promises we’ve been making since 2015 [...]. There are still issues on our agenda that need to be implemented, such as the deconcentration of media ownership, or matters relating to the support of family values. There’s also the issue of prohibiting the promotion of LGBT ideology and different forms of gender studies at universities.

Although the Minister failed to provide any details on when and how such policies are supposed to be implemented, the context of his statement indicates that the government doesn’t necessarily want to rush them. There’s plenty of time for that. The next parliamentary election is planned for 2023.

We asked both Ministries to explain why the Minister of Environment is making public statements on issues outside of his official area of expertise. The Ministry of the Environment didn’t answer, while the email we received from the Ministry of Science and Higher Education only read that “it’s not a good custom for Ministers to comment on each other’s actions and statements”. Asked whether there’s any policy work in progress regarding a ban on gender studies or the so-called “LGBT ideology”, the Ministry’s press office responded with a “no”.

Since April, the Ministry of Science and Higher Education is headed by Wojciech Murdzek, a member of the Agreement party (Porozumienie) led by Jarosław Gowin. An anonymous source in the government told us that Gowin’s party is likely to lose the Ministerial seat after the upcoming government reshuffle, and thus sees no point in engaging itself in an interministerial feud with the faction of Zbigniew Ziobro. It also means that once the Law and Justice party has taken control over the Ministry of Science and Higher Education, Jarosław Kaczyński would have a free hand to follow a similar path to Victor Orban, who banned gender studies from Hungarian universities already in 2018.

Even in medicine. Once doctors started to notice that men and women show different symptoms of the same illness, they found out that while men suffering from an imminent myocardial infraction were complaining of chest pain, women suffering from the same condition had back pain. The example is only one of many.

But the attack on gender studies is hardly a surprise. Conservative and right-wing circles associate gender studies with LGBT. They use the term, however, not in reference to non-heteronormative people, but rather an alleged ideology.

They focused on sexual minorities thinking it will be an easy target, given the fact that the group is rather marginal. But gender theory also leads to the emancipation of women- she adds.

Would it even be legally possible to introduce a ban on gender studies?

Gender out? Not so quickly

-In theory, everything’s possible. But if we were to ask whether such a ban would be constitutionally valid, that’s a different conversation altogether – says Professor Hubert Izdebski, head of the Legal Theory and History of Law Department at the University of Social Sciences and Humanities (SWPS).

He adds that if the government were to ban LGBT research, it would first need to change the law regarding higher education. Such changes would still be illegal, however, because it is only possible to ban the teaching of content which is irreconcilable with the fundamental values found in the Polish constitution. And the constitution doesn’t prohibit teaching tolerance towards sexual minorities and the awareness of the social aspects of gender. It’s even hard to imagine it ever would.

Another legal obstacle is the fact that, in Poland, gender studies courses are mostly offered as a part of post-graduate programs and are paid for by students themselves. Thus, cutting funding for such programs wouldn’t prevent people from studying it. – Banning gender studies in Poland wouldn’t be possible without violating the constitution and the autonomy of the respective university – says Izdebski.

When we point out that it happened in Hungary, he adds –That’s a different country, a different constitution. It’s also a different media landscape and the civil society there is different, too.