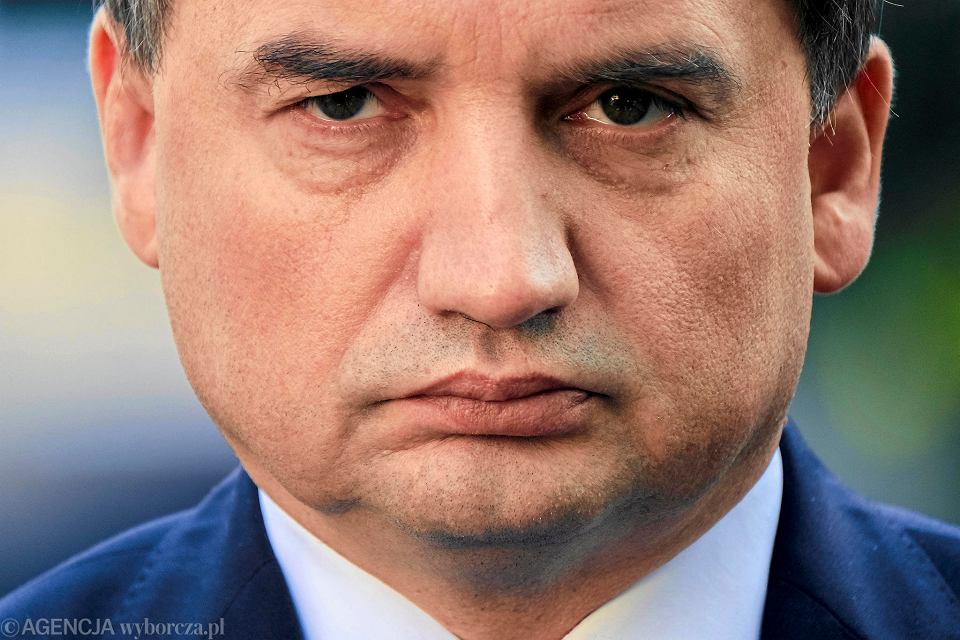 Fighting LGBT is just a set-up. In reality, it is actually a gambit that might lead to Poland leaving the European Union. This needs to be understood by those who explain the recent actions of the Minister of Justice Minister Zbigniew Ziobro purely in terms of his social conservatism.
REKLAMA
Ten artykuł czytasz w ramach bezpłatnego limitu

The war between Prime Minister Mateusz Morawiecki and Zbigniew Ziobro is rapidly intensifying. Ziobro's people launched a media offensive and are convincing journalists off the record that the fight against Morawiecki is about ideological issues and not an element of an internal power struggle within the ruling camp. They explain that Morawiecki agreed to link the payment of EU funds to the rule of law and this will have far-reaching consequences. In their view, this concerns not only the judiciary, but also, more broadly, matters of identity politics.

They argue that Morawiecki's concessions will lead to the Union imposing on Poland a moral revolution that most of our citizens do not accept. In the near future, the EU - they foresee - will threaten to block EU funds if Poland does not pass the law legalising single-sex civil partnership, because its absence will be considered a violation of the EU's legal order. As proof that this is possible, Ziobro's allies point to the EU's decision to withhold payments to Polish municipalities which adopted resolutions instituting the "LGBT-free zones".

Of course, the EU will not impose on Poland any law legalising civil partnership and marriage for single-sex couples. The laws on social and identity issues are not subject to EU regulations. By not granting funding for municipal projects for the LGBT-free zones the European Commission has only reacted to acts that are manifestly hostile to the LGBT+ communities. The intention of Ziobro is clear, however: to spread fear of Brussels to Poles, instill an image of a big bad EU that will come and devour them.

Ziobro therefore decided to drum up the lack of additional funding for the aforementioned municipal projects: he is giving money from the Justice Fund to municipalities that have not been granted funds due to discriminatory resolutions. He is also pushing for a ban on the small Reformed Catholic Church, which is blessing single-sex couples.

The matter of LGBT is only a means to achieve other goals: to exclude Poland from the Union or at least push Poland to the margins of the EU and escalate further conflicts with Brussels.

EU politicians are well aware of such tactics being employed by the Union's opponents and are trying to be restrained: their interference is cautious, and the European Commission has delegated the Czech Vera Jourova to handle the rule of law dossier in order to avoid the accusation that it is the old EU-15 that is putting new member states in the corner.

The EU knows that  it must be conservative and precise in its criticism of the rule of law violations, so as not to arouse emotions or give rise to accusations that it interferes in Poland's internal affairs. Sometimes one can get the impression that some Polish politicians do not understand this when they are complaining that the EU is not decisive enough in its ongoing battles with the Law and Justice party. However, the task of removing from power politicians who violate the constitution lies with the Polish opposition parties and their ability to win elections, not with the EU, and Brussels cannot do their job.

For the Minister of Justice, on the other hand, the dispute with Brussels is of central importance. He will continue to fuel it at all costs and to try to provoke the reaction of EU officials in order to show great outrage at the alleged efforts to strip Poland of its sovereignty. Therefore, Ziobro will not allow Morawiecki to deescalate the ruling camp's conflict with the European Commission.

This split within the United Right was seen, for example, during the EU summit a few weeks ago. The EU leaders made decisions on the distribution of EU funds as part of counteracting the covid economic disaster. Ziobro demanded that Morawiecki should submit a veto if there is even a hypothetical possibility that the payment of EU funds would be linked to the rule of law.

He did not want to accept that demanding a veto from Morawiecki was completely pointless from the point of view of Polish interests. In turn, Morawiecki in the weekly magazine "Sieci" rejected the attacks of the Minister of Justice.

"Let's be clear what was an alternative to the agreement we brought in. There was a willingness of 25 countries to agree on an international agreement, without Poland and Hungary. There was no shortage of those willing to do so, as there would be 50 billion euros more to be distributed from the European Reconstruction Fund alone," explained the Prime Minister. - The European Union does not act in such a way that the veto is a tool that really solves something. I would like to stress once again that if we do not reach an agreement, there is a solution on the table where the other countries get along with each other and we are left with almost nothing, both in terms of the rule of law and funds. Yes, we had a veto, but its proper sense is as follows: "Dear Ladies and Gentlemen, if we do not reach an acceptable agreement, we will shoot ourselves in the head. This was our only weapon. It would have been a little unpleasant, but at the end of the day they would have told us: "OK, then do it if you insist. We'll split the money without you."

Ziobro's faction will continue to turn towards the far-right Confederation

For those who would like to see Poland leaving the EU such an outcome to the negotiations may be exactly what they want. Then it will be possible to viciously attack the EU for excluding us from EU programmes and funding. It is easy to predict the future direction of Ziobro and his acolytes in the perspective of the next several years. The war with LGBT is so absurd that in the long run it will not pay off in terms of gathering new generations of voters.

Young people see what some older Law and Justice (PiS) voters do not: LGBT+ people are full citizens, they are entitled to the same rights as heterosexual people. The fact that they will form formal relationships does not in any way threaten the family or Christian values. The right in the West has already understood this. It will take the older generation some time to overcome this mental barrier, but here too, sooner or later, a change of views will take place. Homophobia will provide some votes, but their number can only decrease.

Ziobro will therefore most likely go after the electorate of the far-right Confederation, which means embracing Polexit. This obsessive conviction that someone is threatening our independence, and the creation of a bete noire in the form of an evil European establishment will be cultivated by Ziobro's people.

Putin rubs his hands in excitement

These anti-EU fears are fuelled by the media sympathizing with the Law and Justice party. In the last issue of the weekly "Do Rzeczy" strong anti-EU rhetoric was employed by Rafał Ziemkiewicz, the leading anti-European far-right media personality, who claims that Poland does not have real benefits from belonging to the EU. For now, Ziobro does not speak openly about leaving the EU, because Poles do not want it. But the LGBT case is intended to cool down pro-EU sentiment.

As long as Poland is a beneficiary of EU funds, Ziobro and Ziemkiewicz will be mostly hold in check, but their activity will be enough to lay the groundwork for the future. Once Poland gets closer to being a net payer to the EU budget, we can expect a manipulative British-style campaign under the slogan "instead of paying a contribution to the EU, let's put that money into health care.

Euroskeptics told the British public that it is possible not to bear any burdens of Eu membership and yet keep all membership privileges, such as access to the EU market. And many believed in it. So if the citizens of a country with such a long democratic and civic tradition bought such nonsense, why shouldn't Poles believe it? Ziobro's milieu is banking that it would, which is why it is trying to maintain good relations with the Confederation, so that once Jarosław Kaczyński retires, they can potentially create a common political far-right front.

While the UK might end up doing fine, probably by deceiving itself that it has left the EU, will in practical terms have an arrangement that keeps it closely tied to Brussels, for Poland the strengthening of the Polexit narrative is an existential threat. It is likely  that the Kremlin will covertly provide resources in order to support this trend at all costs, just as in the French and British cases. The central goal of Putin's regime is to break up the European Union and weaken Euro-Atlantic ties, and Ziobro - together with the Confederation - will be an effective tool supporting the realization of these plans.