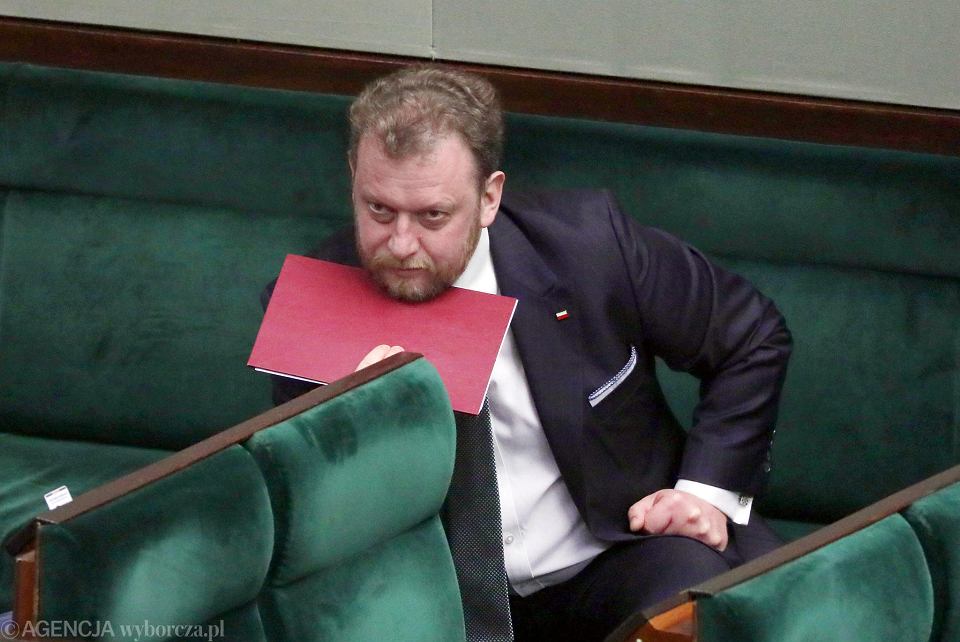 In mid-March, when Łukasz Szumowski was the face of the government's response to the coronavirus crisis, he was widely praised. Two months later he's trying to evade questions about his and his family members' shady dealings.
REKLAMA
Ten artykuł czytasz w ramach bezpłatnego limitu

It would be an understatement to say that the Health Minister Łukasz Szumowski appeared to feel the burden of the task when this crisis broke out. With deep, dark circles under the eyes, hair and beard in disarray, he seemed as though he had not been sleeping at all.

Together with the fact that Poland’s initial response to the pandemic was deep and robust, as the country went successfully into a full lockdown even before the first death was reported, it is not surprising that Szumowski’s ratings skyrocketed.

Not only did he enjoy a huge media spotlight as he fronted nearly every major press briefing, his ministry also appeared to be quite well-organised and capable of shouldering the task - a particularly stark contrast to the government agencies responsible for tackling the economic fallout of the pandemic.

Media wrote favourably about Szumowski and he was on a path to become a sort of a nation’s father-figure,

leading Poles through the public health crisis. It was rather encouraging to see that even the Law and Justice’s government has some people up to the task.

More than two months have passed since then and the Polish lockdown is being quickly dismantled, despite the fact that the number of new cases confirmed daily remains in the hundreds.

It appears that the reason behind Poland’s haste to lift the restrictions is rooted in the government’s inability to support the economy any longer.

The lockdown has also become largely ineffective after the ruling party’s politicians discredited their own policies by attempting to organise the presidential election in the middle of the crisis, on numerous occasions displayed contempt for these rules, and abused the emergency powers to silence the criticism towards the government.

The lifting of the lockdown also takes Szumowski out of the spotlight and it serves the party, as his reputation is in tatters. He is not being asked about the virus anymore – he spends most of his time with the media, attempting to convince the Polish public that inquiries into his shady business dealings are a politically motivated campaign aimed at discrediting the Law and Justice’s presidential candidate, incumbent Andrzej Duda.

It’s quite a challenge even for the state outlets to impose such a narrative on what has been revealed about Szumowski’s and his family’s dealings in the recent weeks.

First, Gazeta Wyborcza revealed that the Ministry of Health had significantly overpaid for face masks. It bought from a skiing instructor who had been introduced to the ministry’s officials by his brother, Marcin Szumowski, and who happens to be also a personal friend of the minister and hosts the Szumowskis during their stays at a ski resort in Zakopane.

The deal was signed off by Szumowski’s deputy, Janusz Cieszyński, a politician who had earlier attracted some media attention when it was revealed that he was the person who added an amendment to the government’s emergency legislation abolishing public servants’ responsibility for misconduct or financial loss.

The ministry spent five million zlotys without verifying certification of the products offered.

After discovering that the masks were useless as the certificates provided by the contractor were false, the ministry threatened to notify the prosecution service but failed to do so until after the publication.

Szumowski denies any wrongdoing, but questions mount about his conduct and reasons for entering politics.

Gazeta Wyborcza revealed that valuation of Szumowski Investment, a company owned by minister’s brother has soared from 40 thousand to 40 million zlotys over the last four years

(i.e. the time Law and Justice is in power) and that the minister himself was a partner at the company but had his shares transferred to his wife before assuming a government post.

Soon after opposition MPs presented documents confirming that a company co-owned by Szumowski Investments received a grant of 140 million zlotys from the National Centre for Research and Development (NCBR), an agency supervised by the Ministry of Science where Szumowski was a deputy minister.

Szumowski claimed that due to a possible conflict of interest he had nothing to do with the NCBR’s supervision while serving at the Ministry of Science. The opposition quickly proved this claim to be false by producing a document signed by Szumowski, ordering a transfer of 57 million zlotys to the NCBR for one of the schemes. The same year, one of his brother’s companies received two grants worth 54 million zlotys in total from the scheme in question.

Meanwhile, news website Onet revealed that the ministry was hugely overpaying for coronavirus testing kits from a company with political ties to ruling party. And soon after Wyborcza disclosed that the Ministry of Health spent 44.5 million euro (i.e. about 200 million zlotys) on 1,200 ventilators. Not only the price – 180,000 zlotys for one ventilator – is unheard of, but also the contractor turned out to be a company owned by an individual listed by the United Nations as a black market arms dealer.

Tabloid daily Fakt wrote that just between 2017 and 2020,the NCBR’s grants awarded to the companies owned by the minister’s brother were worth 74 million zlotys.

According to Wyborcza’s calculations just one of these companies, OncoArendi, received about 300 million since 2012.

An apparent link between the Szumowski brothers and the NCBR was investigated by the Central Anti-Corruption Bureau (CBA) and we know that it revealed a strong conflict of interest and lack of proper oversight over the application assessment procedures.

Despite this, Łukasz Szumowski was given a government role at the very institution that supervised the NCBR - something that is quickly becoming a major question about the entire government’s conduct.

For now the government-controlled prosecution service has refused to reveal the charges the CBA wanted to file against Szumowski.