- It is like receiving a verdict, but nobody tells you how long is the sentence. We live under enormous uncertainty - at the exact time that Damian was telling us this, the Prime Minister and the Minister of Health were holding a press conference during which they assured the general public that after Easter everything would slowly return to being normal. Almost everything, that is - mass musical events are being ignored by the government.
REKLAMA
Ten artykuł czytasz w ramach bezpłatnego limitu

"The whole sector is dead, our market is completely gone," Alina, a manager of several bands, says sadly. She takes care of niche artists. Their concerts are usually mildly popular,  and there are always doubts whether the tickets would cover the expenses. Now there is panic. All events must be canceled or rescheduled. Preferably after the summer. Alina planned the first concert of one of her clients for  August 21, as long as epidemiological circumstances permit it to take place. In total, she was forced to rebook 15 concerts.

- I had to reschedule. Everyone postpones. Maybe I'll start earning in the fall. It's hard to make a living from concerts unless you have a star in your "stable". I do not have one. So I have to gather a minimum of 500 spectators in the club to get any profit. Otherwise you have to contribute to the business. If I am left with PLN 500 from one event, I am happy. If the concert halls don't open for the summer, they will not survive, and with them the artists will go down as well. Besides, who will come to the concert after the quarantine? People are losing their jobs, they fall into debt, have more important expenses on their minds than culture - Alina sees the future in black.

For now, she has something to live on, but soon the money will run out, because the artists she represents will not pay her for inaction. There are no concerts, so there won’t be earnings. - I will have to count on the support of my family. But who will help me, my retired mother? - Alina asks rhetorically.

How long will the sentence be?

„We will be the last to return, after all other industries are allowed to re-open” - Damian, a concert agent, predicts. - I hope this will be in June. It is like receiving a verdict, but nobody tells you how long the sentence is. We live under enormous uncertainty” - at the exact time that Damian was telling us this, the Prime Minister and the Minister of Health were holding a press conference during which they assured the general public that after Easter everything would slowly return to being normal. Almost everything, that is - mass musical events are being ignored by the government. They are still prohibited until further notice.

The industry complains about the terrible information policy of the government, which - which is partly understandable - is not in a hurry to re-authorize mass events. But at the same time, the administration refuses to give an estimated date forecasting the return of concerts. - Bans are time-specific throughout Europe. Only the Polish government is not mentioning any dates, even forecasts. It is difficult to plan anything this way - Piotr Orlicz-Rabiega, head of the Audioriver festival, shakes his head.

That is why the entertainment and culture industry wrote a petition to the government to recognize its existence, because the four-stage plan for the normalization of the Polish economy does not mention clubs and events at all. 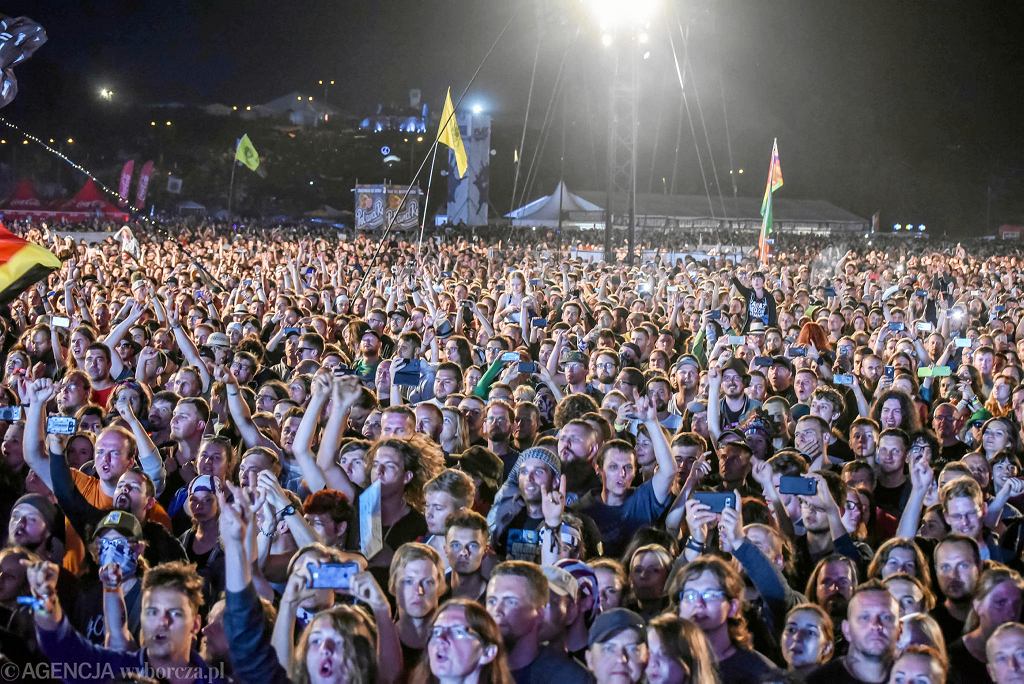 - In Spain, the clubs will be closed until the end of December this year. Here? No one knows. The Polish government has no idea what to do with the concert industry. There is a lack of institutional support and no long-term strategy. Most concert halls cannot be rearranged. They do not have a kitchen, they cannot sell take-outs, '' says Hubert Grupa of Muno.pl, who inspired the petition. By the end of April, it collected over 17,000 signatures.

Damian organizes large concerts of A-list stars. He regularly sells out concert venues with more than 4,000 seats. This year, he planned seven large events throughout Poland. Tickets were sold off in an instant, but sales completely stopped in March. For now, he has rescheduled concerts until late autumn, but he may have to move them to the beginning of 2021.

„I do not want to cancel, because one canceled event is the loss of hundreds of thousands of zlotys. And it's not like if 5,000 people will appear on Torwar (concert hall in Warsaw), and each pays PLN 150 for a ticket, then 750 thousand PLN goes into my pocket. I have to pay in advance for the promotion, for renting the hall, fees, I have to give advance payment for catering, pay the accommodation of artists in hotels. And yet there is no guarantee that the tickets will sell.”

- Entertainment business is a continuous investment - admits Damian. - If you organize a lot of events, it keeps on sustaining itself. You do not settle for a single event, you do the entire concert tour. I don't know how to plan the future. So what if I move concerts to other dates? They may not suit ticket holders. And if a hundred people start dying because of coronavirus every day, even after lifting the restrictions, people will be afraid to come to any concert.

When the government announced the first restrictions in mid-March and closed the cinemas, theaters and concert halls, the organizers of May outdoor events realized that there was no point in waiting any longer and one by one they were canceling open air concerts. People in the industry were not surprised. Free music events are covered to a large extent from local government spending, and these now have more urgent expenses. The cost of student music festivals or city days is an expense of PLN 400-500 thousand.

Even Glastonbury, the famous British music festival reuniting 200 thousand people each year, was cancelled. Coronavirus is the headliner of this summer. In Poland, there will be no legendary Jarocin punk festival, or the enormous Pol'and'Rock festival organized by Jurek Owsiak. The Orange Warsaw Festival was postponed until next year, same went for Audioriver in Płock.

- Due to a pandemic, the borders are still closed, and about 70 percent artists invited to this year's festival were to come from outside Poland. We had to move the event to a different date. Fortunately, we have loyal fans. That I put it this way, 30,000 unique guests who come to us year after year. Even before we announce who will perform, we usually sell 8-9 thousand tickets. I hope that about 90 percent of fans will keep tickets for next year's edition. Then it will be easier for us to survive - says Piotr Orlicz-Rabiega, the organizer of Audioriver.

This year's Open'er has also been canceled and part of the program is to be moved to a future edition.

The OFF Festival is to take place in August. But will it happen? Everything will be clear in June. - We're keeping our finger on the pulse. Although you can't fail to see what is happening with canceled festivals. The music industry has fallen into a dead period. You will have to adapt to the conditions in which we live - says Artur Rojek, head of the OFF Festival.

When large scale gatherings were restricted and later de facto banned, the head of the club Progresja in Warsaw, Marek Laskowski, estimated that if he closed the club for a month, he would lose about PLN 300,000.

The government anti-crisis shield extended a helping hand to the entertainment industry, extending the refund period for tickets to 180 days. "It's a good government decision, because event organizers live off tickets," confirms Laskowski. - Thanks to this, the clients did not react hysterically and rushed to regain money, just patiently waiting for the new date of the concert.

Laskowski postponed 90 percent of all scheduled concerts. He refuses to think that mass events will not be restored in the fall. He considered that he might be forced to close the company, but he is not doing so yet.

How to survive, Mr Prime Minister?

The government informs that aid for creative environments provided for in the anti-crisis package may amount to up to PLN 4 billion. Not everyone, however, can use the shield. To count on such support, the entrepreneur applying for it must prove that as at 31 December 2019 he had no outstanding obligations, such as unpaid social security or VAT.

- Unfortunately, we had a slight VAT backlog. Even though we paid them and we don't owe the government anything anymore, we still can't use the shield. The government adopted a one-size-fits-all policy to all, regardless of whether someone was slightly behind on a small payment, or seriously indebted to the tax authorities over a long period of time. It is not fair - complains Arek Śmiłowski from the Poznań club Tama. Fortunately, Tama kept loyal fans who decided to save the club. They arranged a crowdfunding campaign online.  They want to put together PLN 200,000. For now, they managed to collect PLN 15,000.

- The words of the prime minister that hurt me the most were the ones in which he claimed that the entertainment and creative industries are not important, so we can let them wait. I remind you that every year we have 3.5 percent share in GDP. It's more than agriculture. Not only that, a report commissioned by the Ministry of Culture analyzed the impact of the Audioriver festival on the economy of the region. It turned out that one zloty in connection with the organization of our event brought PLN 8.12 of economic impact for the economy of Mazovia. What do you say, Prime Minister? - asks Orlicz-Rabiega.

The government is pressuring others to provide support. In an interview with the Polish Press Agency, Deputy Minister of Culture Paweł Lewandowski stated that collective intellectual property rights management organizations, which associate creators and have huge amounts on their accounts, are statutorily obliged to provide social assistance. And they should be more involved in supporting artists.

One of such organizations is the Union of Stage Authors and Composers (ZAiKS), which annually collects over PLN 300 million from the royalties

- All pay-outs take place on time, and we manage to withdraw some of them ahead of time. This year, until April 14, artists were paid PLN 63 million in remuneration for using their work and over PLN 20 million in additional distribution - Anna Klimczak, ZAiKS spokesperson, replies.

She also reminds that creators who find themselves in a difficult life situation can apply for non-returnable, one-off benefits, loans from the Credit Union and for advance payments for future proceeds. Since the beginning of this year, ZAiKS has granted 200 allowances and 247 advances.

When will it all end and we will be able to go to a concert again? Not anytime soon, it seems.

- In the cinema and theater it is possible to place people every few places, but mass unnumbered events where people stand in a concert hall in crowds under the stage will not be allowed - says an official from the Ministry of Culture. - You will probably need to measure the temperature of the participants before entering, disinfect or ozonate the rooms, and even replace the air conditioning systems, because coronavirus likes to travel this way. A strict sanitary regime will certainly be imposed.

But he doesn't say when it will happen.