Since last fall, the editorial team at Gazeta Wyborcza have prepared a weekly newsletter called the Black Book of the Law and Justice government. In it, we cover the most jarring examples of abuse of the law, the ongoing corruption scandals, and the hate campaigns originated by the representatives of the ruling party Law and Justice and their supporters.
Now, after the assault on the peaceful and legal Equality March in Białystok and the ensuing eruption of hate speech against the LGBTQ+ community, we strongly believe we have an obligation to share with you, our friends, our assessment of the ongoing events in Poland. This is why we are sending you this newsletter.
Minorities in Poland have been constantly under assault since the Law and Justice party came to power in 2015. Today, the government viciously attacks the LGBTQ+ communities. Prior to that, it stirred up resentment against teachers and young doctors fighting for better wages, against judges opposing the dismantling of judicial independence, as well as against people with disabilities, refugees, and others.

There is no freedom without solidarity. This is why it is our obligation to monitor and report government’s attacks on all communities and groups which are scapegoated for political gain.

Last week, “Wyborcza” covered a number of abuses which are eroding our democracy.

Here is our summary of those topics.

More than twenty Polish local government authorities, located mainly in the South-Eastern, conservative part of Poland, passed special resolutions proclaiming themselves “LGBT-Free zones”. It is far from clear whether these have any legal value. However, given the discriminatory intent of the resolutions, can the citizens challenge them in court?

According to Dawid Sześciło, a professor of law and an expert working for the Polish Ombudsman office, there can be no doubt that these acts violate the Polish Constitution. He points to the effect of the resolutions on public education, where local authorities have substantial margin of manoeuvre. In professor Sześciło’s view, individual citizens are thus within their rights to initiate legal action against the local authorities.

In the upcoming weeks, Gazeta Wyborcza will be interviewing leading Polish lawyers about how to succeed in such legalproceedings in order to inform and support our readers. 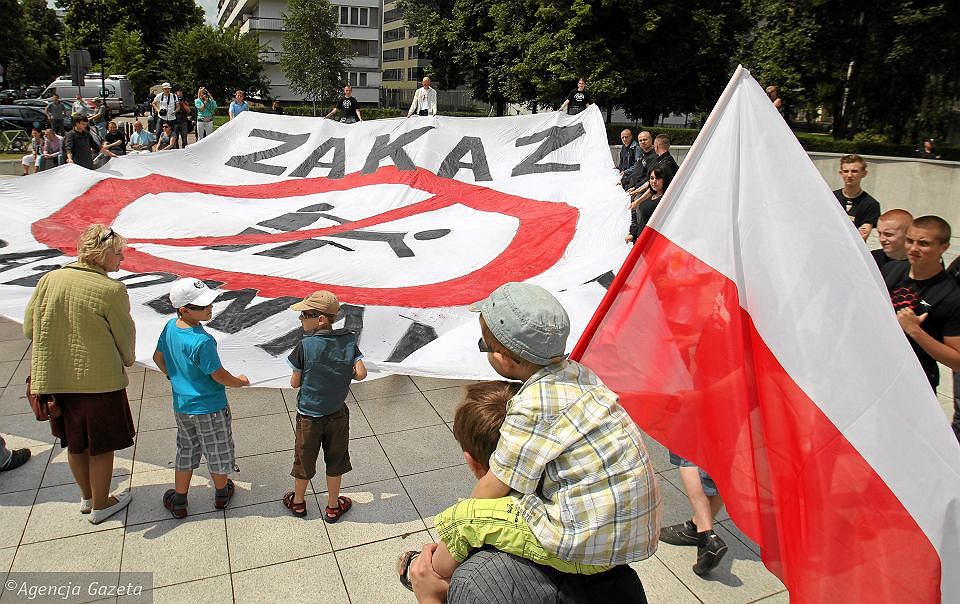 2. The language of contempt and hatred comes from the top echelon of the Catholic hierarchy.

On the occasion of the commemoration of the outbreak of the Warsaw Uprising, Archbishop of Cracow Marek Jędraszewski viciously attacked the LGBTQ+ communities, comparing the “rainbow plague” to the Soviet “red plague”, and calling it the new threat that aims to corrupt Polish “souls, hearts and minds”.
Jędraszewski's words were met with an outcry, as many people gathered in protest in front of the Archbishop’s palace. In addition to protesters carrying banners such as “I am not a plague”, a viral #JestemLGBT (#IamLGBT) initiative on Twitter brought together tens of thousands of citizens publicly coming out. In a show of solidarity, Gazeta Wyborcza started a newsletter for LGBT+community, and we continue to vigilantly monitor all signs of discrimination.

3. “Little green men” from Russia are actively involved in the digital campaign against the Polish LGBTQ+ communities.

In our special investigative report we analyze the links between religious radicals, the extreme right, the Law and Justice party, and Russia in order to uncover the source of this exotic alliance against the LGBTQ+ communities. We show that while the homophobic hate campaign originated in niche online portals with murky links to the Russian state-supported propagandists, the Polish ruling party bears full responsibility for introducing the hateful, anti-LGBTQ+ narrative into the mainstream public debate.

The extent to which PiS is willingly playing the role of a Russian Trojan Horse is hard to determine, but the Russian interference is undeniable. In our report we map out the existing connections to reveal the depth of Russian involvement in the rise of the ongoing homophobic campaign in Poland.

LAST BUT NOT LEAST

Do you want to support us by sharing our coverage with your friends, by offering your advice or opinion, or by financially supporting free media and other few remaining independent institutions  in Poland? Contact Joanna Krawczyk at joanna.krawczyk@agora.pl

Was this e-mail forwarded to you? Sign up to this newsletter at: join@agora.pl
If you need more information for editorial purposes, contact Roman Imielski roman.imielski@agora.pl

We need to show solidarity, or else no one will stand in protest when the authoritarian power comes after you, after me, after us. We need to stand with those who are beaten, not those who beat them.

Authoritarian states flourish not when bad people do bad things but when good people allow them.
Today we are asking fellow Poles and our friends abroad to join the movement of people of solidarity. Your position gives you the right to speak out loud when others are being hurt. We do not have an army to defend ourselves, but we have words that can help those who are being harassed. Your voice is valuable because it can open the eyes of those who still prefer to turn their heads and remain silent. Now is the time to call things by their names. Let us speak the truth about the situation of free Poles in their own country. Let us remember that there is no freedom without solidarity.